Menu
Menu
Home > Refugees in Nigeria: Jesus Christ is my salvation – that is what I celebrate at Christmas
Donate
Menu

Many of the victims of Boko Haram are still refugees in their own country and face daily trauma and anxiety. The danger has not passed, but the Church is bringing them consolation and hope. 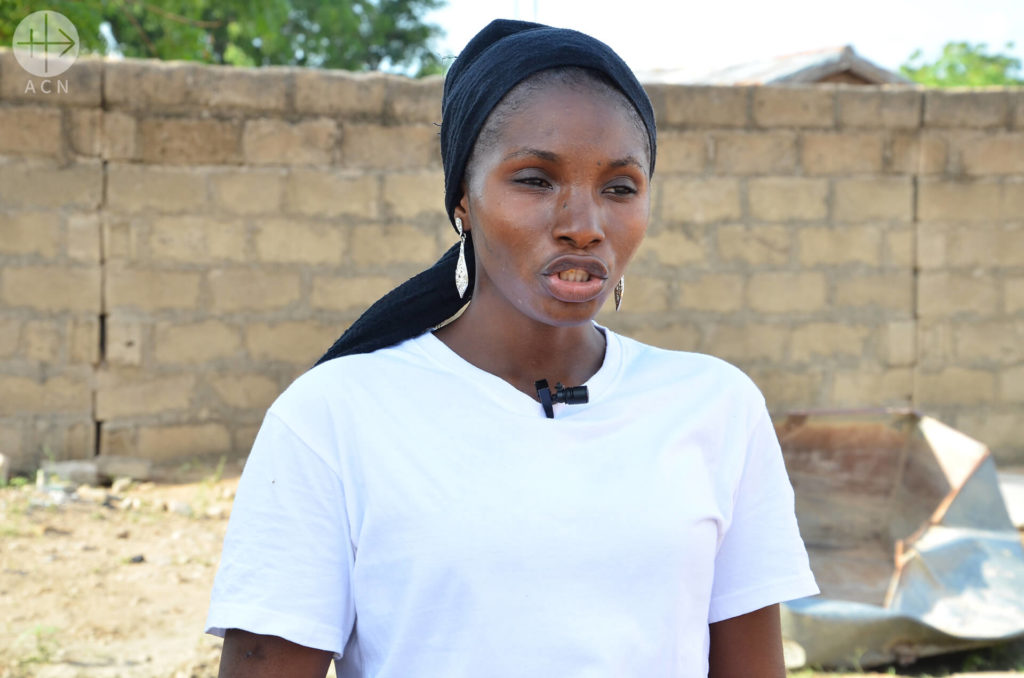 “I don’t want there to be any night-time. I wish it was always daytime. My nights are full of fear, anxiety, nightmares”, says Naomi, a young Nigerian woman, an internal refugee. Like so many of her fellow compatriots in northeast Nigeria, Naomi relives the same nightmare every night: being abducted, the terrorists storming her town, forcing her to “marry” a Boko Haram terrorist or witnessing one of the extremist insurgents murdering someone in her family…

“I get frightened as soon as night falls”, this young woman confesses. She is just one of more than  30,000 internally displaced Nigerians in Pulka, close to the border with Cameroon and around 75 miles (120 km) from the city of Maiduguri, the capital of Borno State in northeast Nigeria.

Similarly, Charles, a young father of a family who is 33 and a refugee in the same place, also admits to having recurrent nightmares. “I relive the time when we were living in hiding. Since the terrorists used to attack by night, we would get out of the town as soon as night began to fall and hide in the bush. Many nights I still dream that I’m in hiding”, he explains to the international Catholic charity and pontifical foundation Aid to the Church in Need (ACN International).

Both are now living next to the Alpha refugee camp in Pulka – just one of the 20 refugee camps scattered across Borno State and one of six in the Gwoza district alone.

Boko Haram attacks changed the lives of Naomi and Charles completely. Muslims are a majority in Borno State, and in Gwoza they represent almost 90%, but Naomi and Charles are Christians. It was a little over 50 years ago when the first Catholic missionaries came to Borno, bringing the Faith, and with it the first schools. They helped bring development to an abandoned people. But the terrorist Boko Haram group also had a definite agenda, and one of its objectives was to do away with the Christians and with education.

Without their faith, many people would have not been able to endure so much suffering, explains Father Christopher, a Catholic priest from the diocese of Maiduguri who is ministering to the refugees. “First of all they tried to frighten them and threaten them, trying to force them to convert. Then they began to get more violent. The priests had to hide and sleep in the mountains, but the insurgents of Boko Haram continued to harass and persecute the people. If they converted, they would not be hurt, people were told… Eventually, the situation became so difficult that between 2015 and 2016 many people decided to pack up their belongings and leave the country, crossing the frontier and seeking refuge in Cameroon. Of those who stayed behind, some were murdered and others managed to escape”, Father Christopher explains. 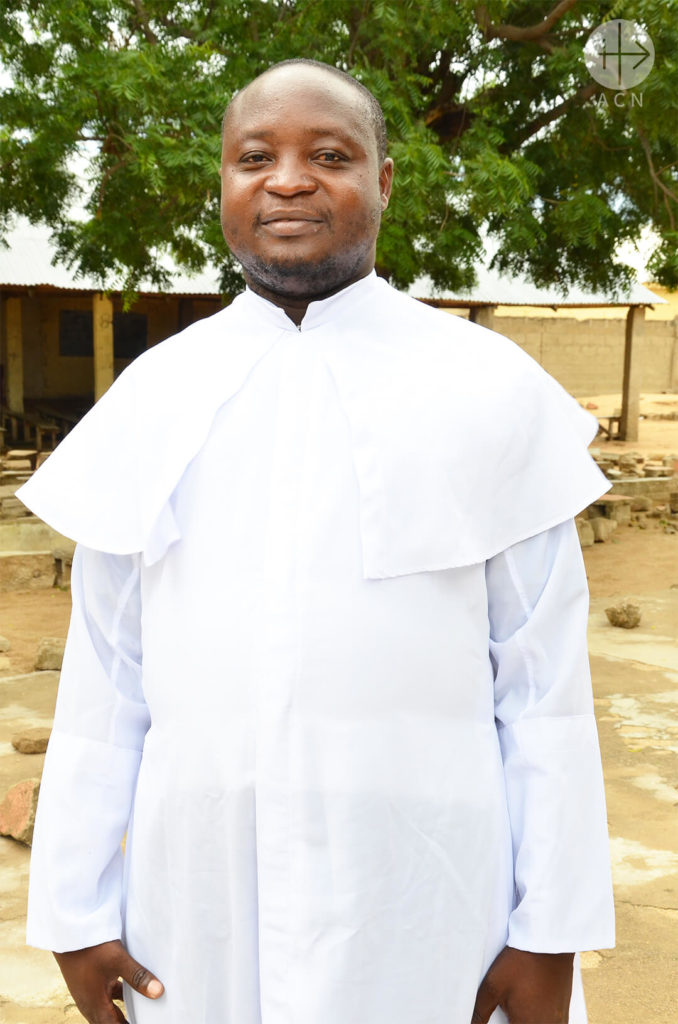 Together with most of the people in the area, Naomi and Charles left everything and fled. “It was by no means easy”, Naomi recalls. “Our feet were swollen and blistered, it was too much for us. My sister was captured by Boko Haram, but she had a baby in her arms and that was the only reason they let her go. It wasn’t her baby, as it happens, she was only carrying it at that moment, but it saved her life. Many other people – like my mother – were murdered.”

The vast majority of the people from the Pulka area fled to Cameroon. In the town of Minawao alone there were over 60,000 Nigerian refugees at one time. They stayed there for several years, until the Nigerian army succeeded in recapturing the towns and villages in the Gwoza area and persuaded them to return.

“They can’t go far from the refugee camps, since their security cannot be guaranteed outside the camps. In any case, in the rainy season it is more difficult to move around. They go out to till their fields, because they have something to live on, but there are continuing attacks, and some people get killed. It is by no means easy, and it is not easy for me either, simply getting here. Coming and going is always a risk, but it is important to me to do everything I can to help these people”, Father Christopher explains. He continues to minister to the refugees, but he himself is living in an abandoned house, since Boko Haram destroyed the church and the presbytery in Pulka in 2014.

“Life in Cameroon was so difficult that we thought we would never hope again. Father Christopher is a source of inspiration for us. When we are really down, he gives us courage. He is a true father to all of us and is trying to fill the gaps in our lives left by our missing family members, because many of them were murdered. He cares for us as if we were his own family. God is providing and helping us, thanks to so many people around the world who have not forgotten us. We pray that God may give strength to all these benefactors and that you may be able to continue doing your work and supporting us”, says Naomi

Christmas is a particularly difficult time for the Catholic community in Pulka. “Before the crisis, Christmas was a time of great joy, because our relatives used to come from a long way away and celebrate together with us. When the attacks began, Christmas stopped being what it had been before; we couldn’t sing Christmas carols in the community or visit other people’s houses; we couldn’t even go out of our houses at night time. The situation was so dangerous that Christmas stopped being a festival, and we couldn’t celebrate it”, she tells ACN.

And Charles, whom God has “blessed with four children”, as he likes to put it, agrees with her that “celebrating Christmas is hard in our situation. Most of us who once lived in Pulka, have lost everything.” But he also adds, “The Gospel gives me the strength to face all this suffering and to endure everything we confront each day. Jesus Christ foretold the suffering that we are going through. Suffering is part of being Christian. Our lives are in His hands. I am filled with hope when I remember the words of Jesus, that He will reward us at the end of our lives. Jesus Christ is my salvation – and that is what I celebrate at Christmas.”

“It is beautiful and painful at the same time”, says Father Christopher. “They have lost their homes, they have lost many loved ones, but they live the virtue of hope and they celebrate life. They trust in the Church, because she is the one who listens to their pleas and always endeavours to dry their tears. That work done by the early missionaries means that they now feel strong in the faith and faithful to the Church.”

Naomí doesn’t have to think long in making up her Christmas wish list: “What we most need here is food, tents and clothing… We are even seeing some cases of cholera now and we don’t have any place to go for medical treatment. It would also be a gift to get help with our academic studies; some of us were students before the extremist attacks, and we had to give it up because we had no money to continue – but that is one of the things that would be most helpful for us.”

Father Christopher also knows what he would like for Christmas. “What I would like is that this Christmas many people would feel the desire to help the refugees in Pulka, and their physical, spiritual and mental health. They long for peace in their lives, for peace to return to their homes. Our desire is a very simple one – we simply want to live a normal life and return to the life we had before.”

ACN is seeking help for a number of different projects on behalf of the uprooted people of Pulka, who include around 14,000 Catholics. Among these are a borehole to provide water for the refugees, the rebuilding of the Saint Paul’s parish house in Pulka, so that Father Christopher can return to live there, and help for 23 catechists who are working among the refugees from Pulka, both in Nigeria and in Cameroon.