Menu
Menu
Home > NEWS > Bahrain: The Cathedral of Our Lady of Arabia will be consecrated on 10 December
Donate
Menu

The Apostolic Vicariate of Northern Arabia which covers Bahrain, Kuwait, Qatar, and Saudi Arabia has an estimated 2.5 million Catholics who are mostly migrant workers from different nations and diverse cultures. To provide them with pastoral care the late Bishop Camillo Ballin started a bold project: the construction of the Cathedral of Our Lady of Arabia, Patroness of the Arabian Gulf. 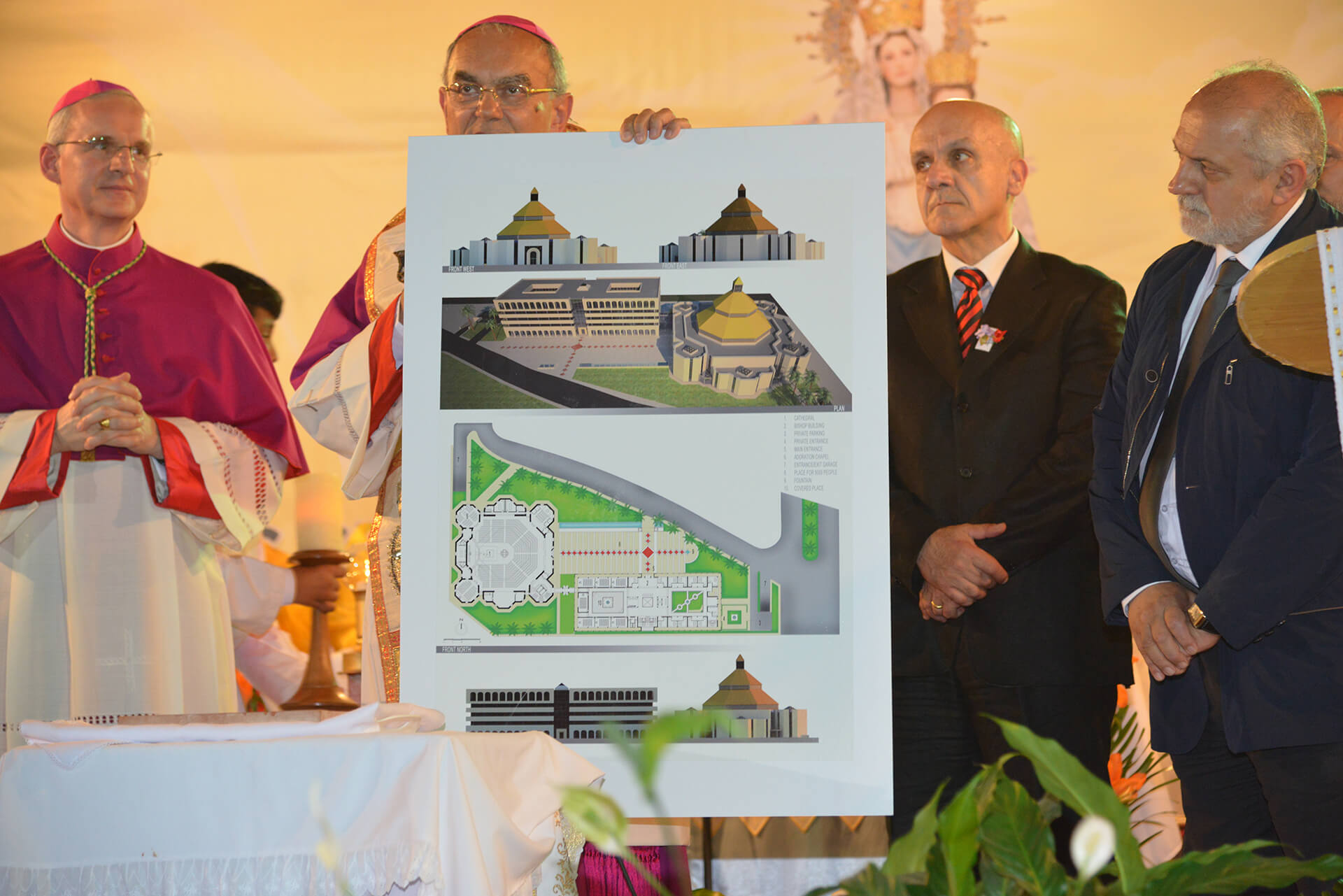 On December 10, 2021, the Our Lady of Arabia Cathedral will be consecrated by Cardinal Luis Antonio Tagle, Prefect of the Congregation for the Evangelisation of Peoples, in the presence of Archbishop Eugene M Nugent, Apostolic Nuncio for Kuwait and Bahrain and Bishop Paul Hinder, Apostolic Administrator of Northern Arabia, after the demise of Bishop Camillo Ballin in May 2020.

A day before, on December 9, 2021, His Majesty King Hamad Bin Isa bin Saman Al Khalifa, one of the big supporters of the project and the donor of the 9,000 square metres of land, will inaugurate the new complex. 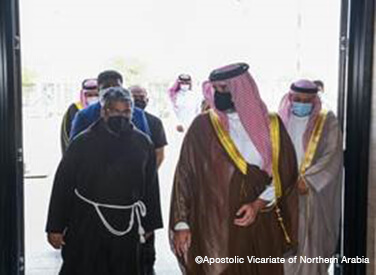 “The people are very enthusiastic and joyful, and waiting for the historical moment of the inauguration and blessing of the Cathedral. But we badly miss our Bishop Camillo Ballin,” said Fr Saji Thomas, project leader and parish priest of the new cathedral, which is situated in Awali, south of the country’s capital Manama.

Fr Saji sees the Cathedral as “a model of religious harmony, a sign of the tolerance of the Kingdom of Bahrain and a great example of peaceful coexistence to the world”. The first Catholic cathedral in the Persian Gulf in modern times was also built in Bahrain, in 1939, on land granted by the Emir of Bahrain.

“Recently, on September 30, 2021, the King’s Personal Representative and President of the Supreme Council for the Environment, His Highness Shaikh Abdulla bin Hamad Al Khalifa, visited the Cathedral. He expressed his delight as he toured the facilities and the Cathedral itself. He was very impressed by the hand-painted icons and the extensive structure. Along with the faithful he himself is looking forward to the opening of the largest church in the Arabian Peninsula, Fr Saji explained to Aid to the Church in Need (ACN). 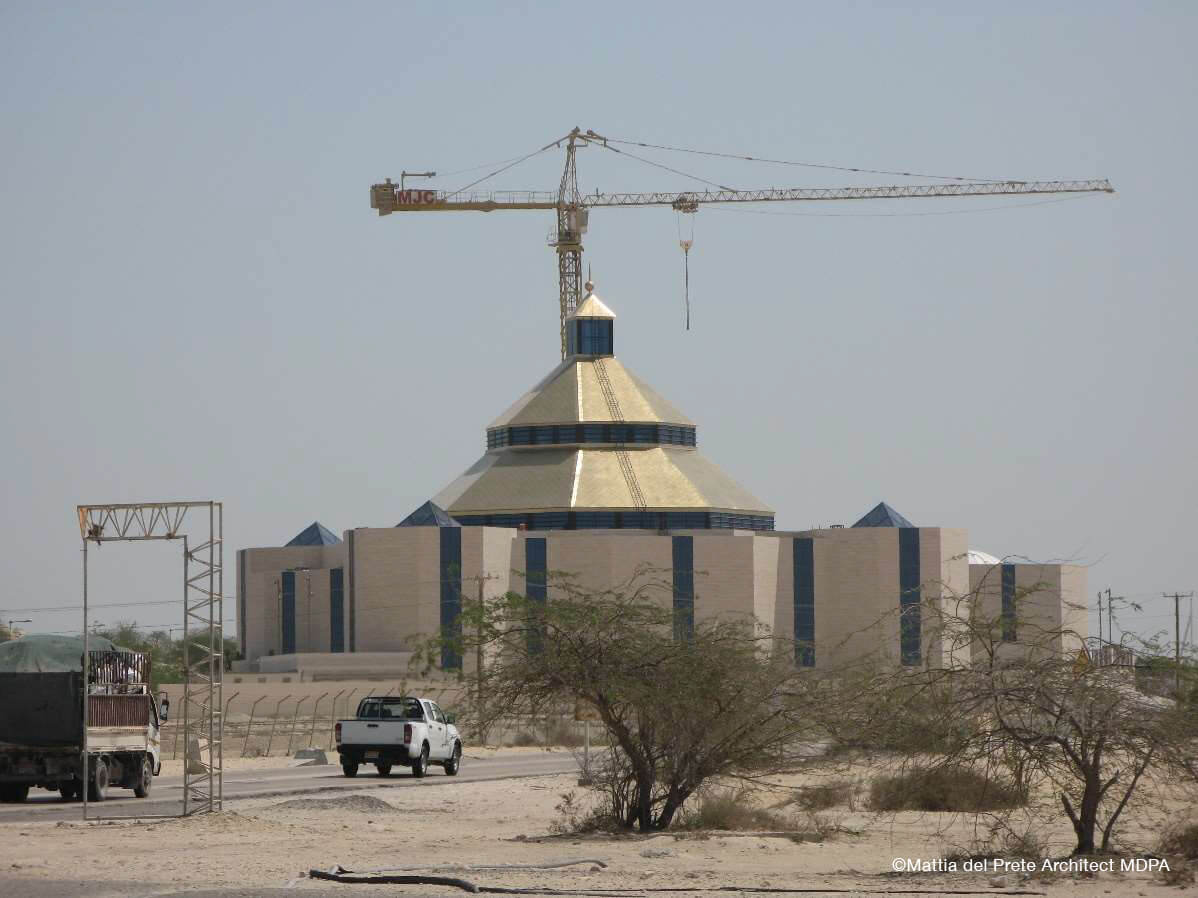 The construction of the Cathedral marks a big step forward in Church-State relations and is also a testimony to the ever-increasing number of Catholics in the region. The pontifical foundation and international charity ACN supported various stages of this project for the Christians in the Arabian Peninsula. Up until now, just five formally designated churches have been caring for Catholics in the 880,000 square miles which make up the Peninsula. 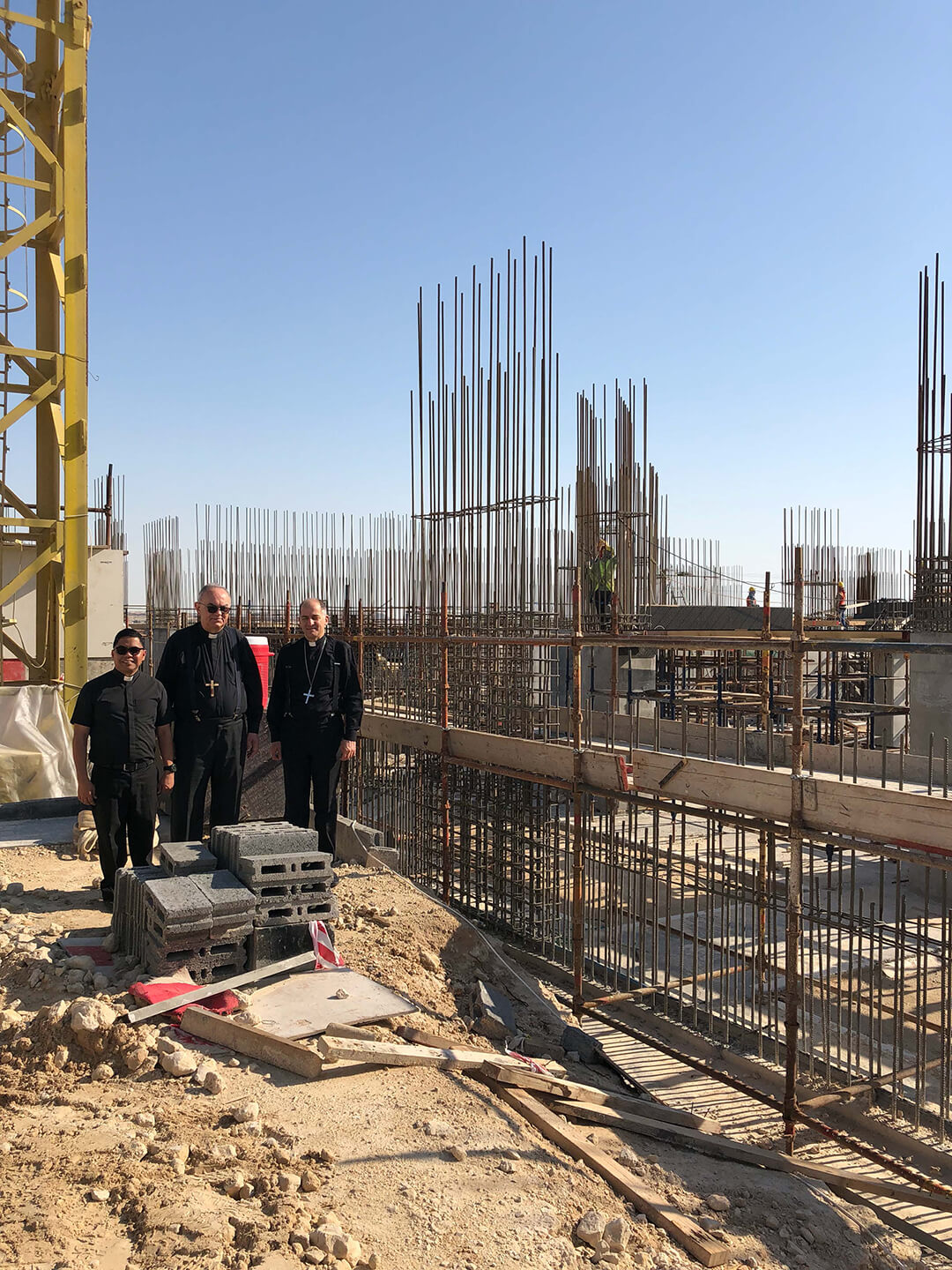 Remembering Mgr Ballin, Regina Lynch, Head of Projects at ACN, commented: “He showed a big determination at the time to overcome a huge number of challenges. Since the ceremony of laying the first stone on May 31, 2014 it’s been more than six years of hard work and lots of trials. I’m sure that Mgr Ballin is celebrating with us in heaven.”

Up until now, Bahrain had only one church in the capital and a small chapel in the suburbs. With 90,000 Catholics in the country, 25 Masses had to be celebrated in the parish from Friday to Sunday and the church was packed.

“There is a floating population coming and going for work purposes. We have an international community here, mostly from, India, the Philippines, Pakistan, Sri Lanka, Lebanon, Palestine, and Jordan, but also from many countries in Latin America and in Africa. As for the rites, we have Latin, Syro-Malabar, Syro-Malankara, Maronite, Coptic, etc,” explains Fr Saji. 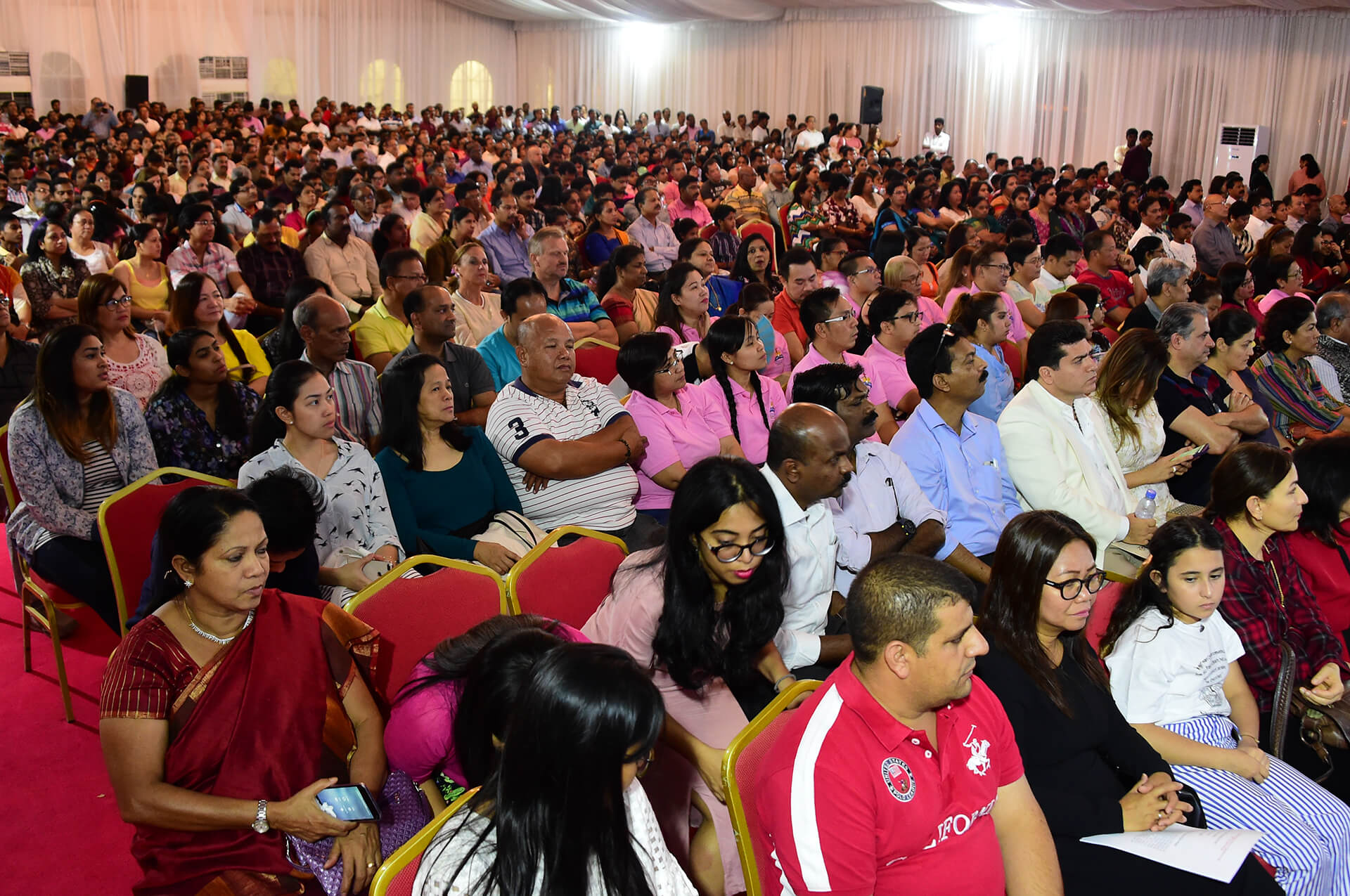 The Cathedral is not just for the Catholics in Bahrain, but also for all the Catholics in the Arabian Peninsula, which comprises four countries. It’s especially important for the faithful in Saudi Arabia, where there is not a single church to gather the almost 1.5 million Catholics. “In the whole of the Arabian Peninsula, but particularly in Saudi Arabia, the public practice of Christianity is severely restricted and limited to the grounds of foreign embassies and private homes. For this reason, many of the Christians who live in Saudi Arabia come to the neighbouring Nation of Bahrain to receive the sacraments and live their faith in community,” said Regina Lynch.

“The Christians in Bahrain have a very difficult life. Not because of the government, but because they have left their own country, their families, and friends. Many are alone. So, they suffer a lot and need special spiritual formation to help them to remain what they are, otherwise they are lost,” explains Regina Lynch. Especially right now with Covid-19, the economic crisis, and the shortage of job opportunities, the new Cathedral is a sign of hope for all the Christians on the Peninsula. 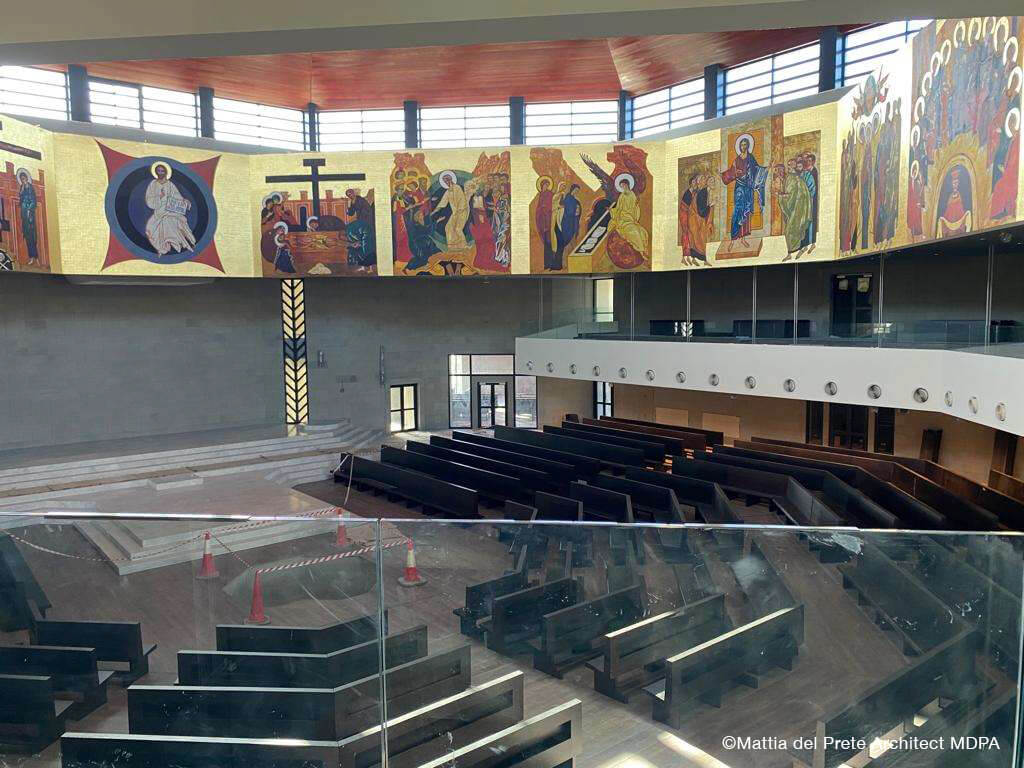 “The Cathedral in Awali has a seating capacity of 2300, with two chapels and two big rooms with places for confessions. Structurally, the shape of the Cathedral resembles a tent in which, according to the Old Testament, the Prophet Moses met his people” explains Fr Saji to ACN.

One of the chapels houses the patron saint of the Apostolic Vicariate of Northern Arabia, Our Lady of Arabia – the crowned Virgin Mary holding a rosary and the infant Jesus. The new complex next to the Cathedral will be the headquarters for the Apostolic Vicariate of Northern Arabia, created in August 2012. The centre will also be open to other Christian denominations.