The very day the invasion of Ukraine began, the Catholic pastoral charity and pontifical foundation Aid to the Church in Need (ACN International) announced an emergency aid package of 1 million Euros for Ukraine. And last week ACN increased its aid package by another 300,000 Euros to help the Catholic Church in Ukraine cope with the challenges of the war that is now being waged on Ukrainian territory. 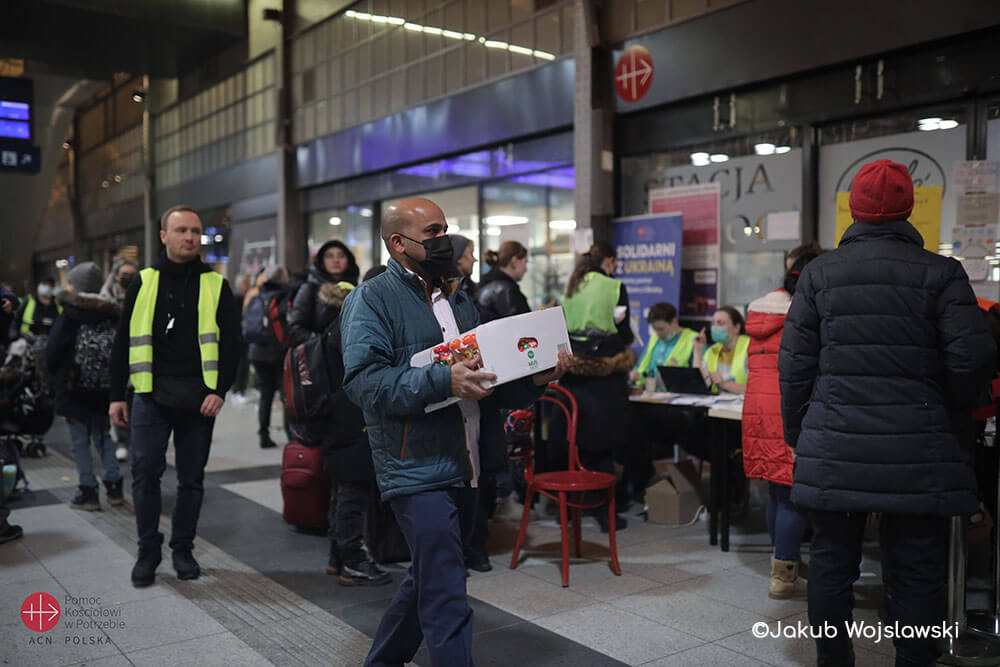 Quite apart from this aid, ACN International has been directly involved with the refugee crisis prompted by the Russian attack. In particular the ACN office in Poland in the city of Wrocław has been the first point of refuge for thousands of refugees. Poland already has over 1.5 million refugees, and many of them are crossing the frontier into Przemyśl, which has a direct connection with Wrocław, so that thousands of Ukrainians are arriving here daily.

ACN opened its office in this city just two years ago and it is located right next to the Central Station. “It was an act of God’s providence that we should have our office right next to the Wrocław train station. When the Ukrainian refugees arrived, terrorised and exhausted in a place unfamiliar to them, we were already there to help”, explains Father Andrzej Paś of ACN Poland, who is leading the aid initiative for the refugees. “The people getting off the trains are immediately told by the volunteers where they can go to receive help”, he reports. 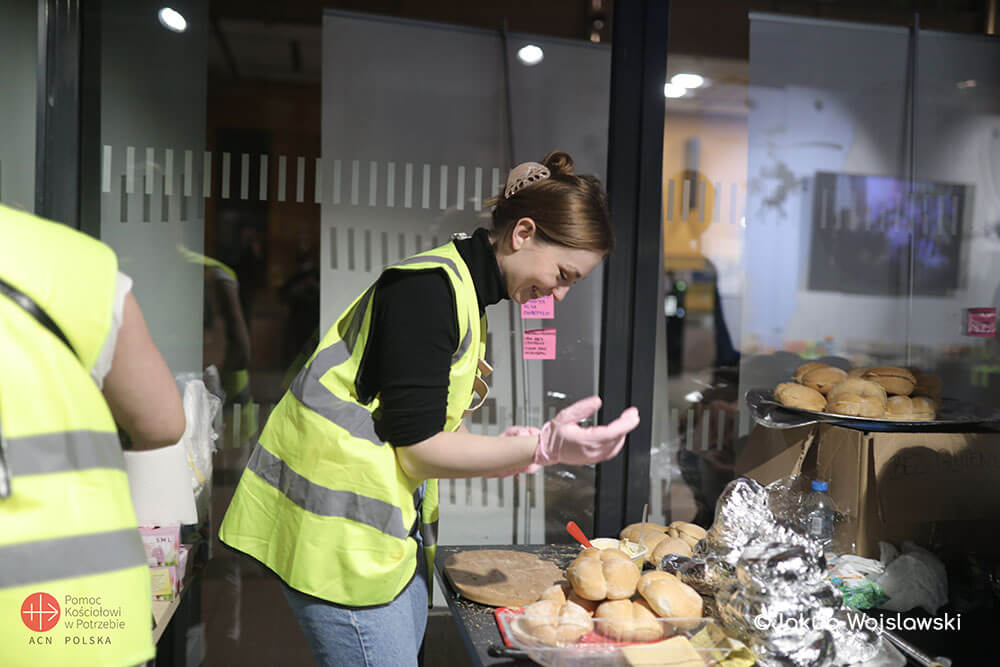 As soon as the emergency aid programme was launched, hundreds of volunteers turned up at the office ready to offer their time and energies in helping. Since then the office has remained open day and night. “We welcome everyone”, says Julka, one of ACN Poland’s longstanding volunteers. She confesses that she was not expecting quite such a high number of refugees, but that at the same time she has been astonished by the intense activity of all the volunteers. “There are so many of them, and sometimes they are working 24 hours a day”, she adds.

Among the people helping the refugees is Damián, a seminarian, who travels every day from the Salvatorian major seminary in Bagno, almost 25 miles (40 km) away from Wrocław. “We don’t have classes until midday, so we are here offering help. Half the seminarians have been helping out in these recent days”, he explains.

Father Andrzej Paś admits that the coordination of the whole campaign has been an enormous challenge. “In order to help as a volunteer you need to join the Facebook group Help for Ukraine – PKP Wrocław. You need to be part of the programme”, he explains. Each day new information is given in this group. “I give information above all about what is needed”, says Julka. There is a continuous stream of messages about what is required. For example one day it might be blankets, sleeping bags, bandages, sanitary items and nappies. The next, they may urgently need children’s socks and shoes of Euro size 33 to 39.

Thanks to the help of all these volunteers, everything that arrives in ACN’s offices is duly stacked and classified. “We ask people to bring us new things and not already worn things. And in the case of food, we ask for things with a late use by date”, Father Andrzej explains. In fact the amount of aid brought in by benefactors and friends has been so large that they’ve had to open an extra warehouse outside the town. Meanwhile, the first shipments of urgent food have already been dispatched to Ukraine. 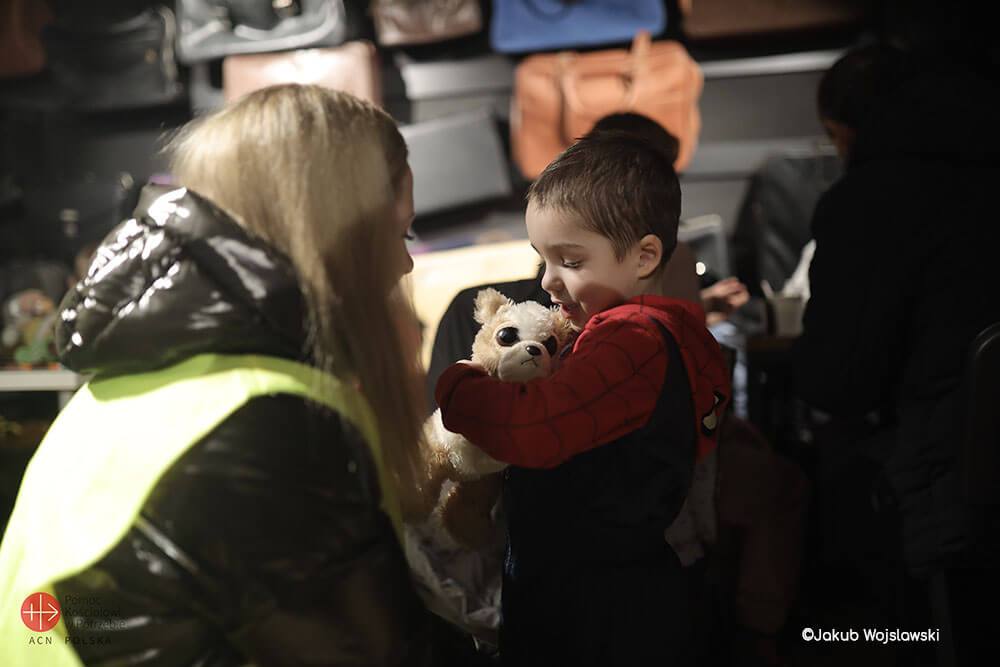 ACN’s offices in Wrocław bear the name “Dialogue Station”. This is where the refugees can get immediate help. “Restaurant owners come to us bringing soup and sandwiches, and many people are offering their help to cook pots of soup, stew and casseroles”, says ACN volunteer Julka.

And so the arriving refugees can immediately be given a hot meal and find somewhere to rest. There is also a special place for mothers and  children, as well as a medical aid centre, and a psychological support centre run by Andżela, a Ukrainian woman who has been living in Wrocław for the past two years. “The people arriving here are traumatised. They don’t know what the future holds for them and they are profoundly distressed. I explain to them that they are in good hands”, she explains, adding that she provides telephone consultations, even at night if necessary – whatever she can do to be as close as possible to her fellow countrypeople.

Everywhere there is a response of great gratitude, and Julka relates how the refugees constantly ask for her telephone number, “because they want to invite me to Ukraine when everything gets back to normal”, she explains. “The governor of Lower Silesia, the province to which Wrocław belongs, has organised accommodation, as have many individuals, willing to offer hospitality and provide shelter to those in need. And also information about possible employment”, Father Andrzej adds.