Menu
Menu
Home > HAITI: “The statistics are alarming, but they are no more than a hint of the suffering being endured by the population”
Donate

Speaking by telephone to the international Catholic pastoral charity and pontifical foundation Aid to the Church in Need (ACN International), Cardinal Chibly Langlois, Bishop of the diocese of Les Cayes, described the terrible situation facing his people in Haiti. “So far, we have still not received any tents. The people are sleeping on the ground. There is no water, no electricity, no food, no clothes.”

Many of the people are traumatised, and some still don’t know what has happened to their family members. The aftershocks are continuing. In terms of material damage, the full picture of the devastation caused by the earthquake is gradually becoming apparent. ACN has just received a partial report, since it has not yet been possible to gather information about all the parishes in the diocese of Les Cayes. So far, a total of 682 deaths have been recorded in the diocese, with 2,175 people injured and almost 11,500 homes damaged. In addition, 135 churches have been destroyed and 111 damaged to a greater or lesser extent. 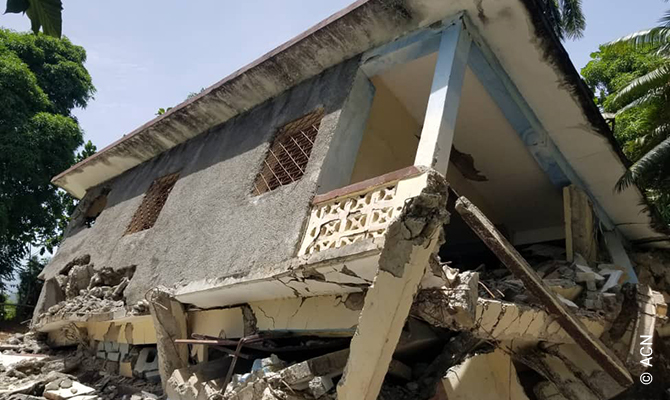 “I thank you for your concern for our diocese. I am moved by your closeness, especially during this difficult time following the earthquake”, the Cardinal said. “Miraculously, we escaped unhurt, but many people have lost their lives, among them Father Jacques Percy, a retired priest who was staying in the bishop’s house. Thank you for remembering him in your prayers”, Cardinal Langlois told ACN.

“The statistics are alarming, but they are no more than a hint of the suffering endured by the population”, said Rafael D’Aqui, the head of the Latin America desk with responsibility for Haiti. “We are closely following events on the ground, but it is complicated, because telephone communication is difficult and the infrastructure is damaged in the affected dioceses, which are a long way from the capital.”

“The bishop’s house has collapsed and everything is in ruins. Needless to say, one of the most urgent needs that ACN would like to help with is to provide the diocese with a new working base and equip it so that it can coordinate the aid and supply the people’s needs at this very difficult time. There is also a need to provide the bishop and his closest collaborators with a roof over their heads, since they have lost everything. We had great difficulty even contacting the Cardinal, since he hasn’t even got his mobile phone”, added Rafael D’Aqui.

According to ACN’s sources, there are continuing attacks on the lorries travelling from the capital Port-au-Prince to Les Cayes. But at least the road from Les Cayes to Jeremie is now open again, which is extremely important for the diocese of Jeremie – also very badly hit by the earthquake – since it is the only access route to the town. 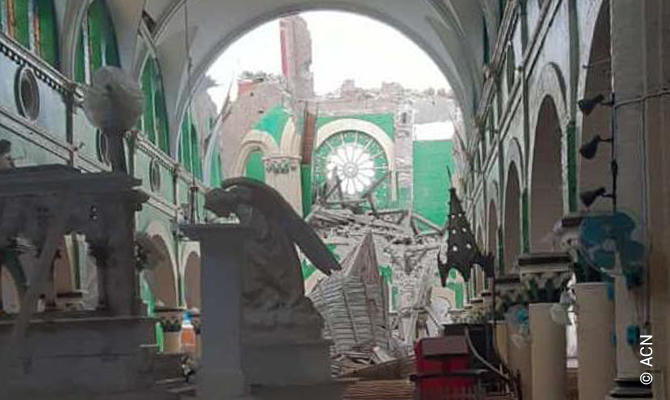 Based on the information received from the diocese of Jeremie, ACN has calculated that a total of twenty-six churches – or almost half of the churches in the diocese (44.8%) – have been extensively damaged, including the Cathedral of Saint Louis, and at least eleven of these churches have collapsed completely. Another eleven churches are still in ruins, having been destroyed by Hurricane Matthew in 2016. A total of thirty-seven out of the fifty-eight churches in the diocese (63.7%) are damaged, while thirty-two rectories or parish houses (69.5%) have suffered serious damage. A total of twenty-five parish schools and eleven parish health centres complete the list of buildings damaged in the diocese.

Bishop Joseph Gontrand Decoste of the diocese of Jeremie has sent ACN’s benefactors his “most profound gratitude for your spiritual closeness, your practical solidarity, your moral and spiritual support and whatever aid you have given the diocese to help it cope with this catastrophic situation, so filled with anguish and suffering.”

ACN’s first emergency aid project involves helping forty-five families in the diocese of Jeremie. “The situation is impossible. The people are too frightened to return to their homes. We have to provide food, clothing, water, medicines and temporary shelter for these people. This is the most important thing at the moment.” The words are those of Father Jean-Jacques Saint-Louis, the Provincial Superior of the de Montfort Fathers in Haiti. Three of the brothers, working in three fledgling parishes in the affected areas, which are so far still without any structures, have between them identified the most needy families.

“I am counting on your prayers and support to help us in these moments of great anguish. At these difficult times in our country, prayer should hold a special place. Thank you for accompanying Haiti with your prayers”, Father Jean-Jacques Saint-Louis continues.