The short film “Lord, Grant Us Peace”, produced by the Catholic Radio and TV Network (CRTN) and supported by the international pastoral charity and pontifical foundation Aid to the Church in Need (ACN International), has won an Award of Merit in the Best Short Film Competition. This documentary focuses on the current situation in Nicaragua as seen through the eyes of Catholic leaders and young people the history of the political repression of recent years, the efforts by the Church to bring about peace, and the suffering of the Catholic faithful.

In an interview with ACN, the director of the film, Francisco Alday, explains his experiences during the filming. He was interviewed by Cristina Moreno for ACN.

ACN: Why Nicaragua? Of all the various countries where, unfortunately, the Church and Christians are persecuted, imprisoned, oppressed…? What was it that made you decide upon Nicaragua?
Francisco Alday: Nicaragua is going through a difficult time in its history, one of political and social tension, serious conflicts and violent clashes. The Church has assumed the role of mediator for peace and intervened in an effort to achieve reconciliation, but this, has made Catholics a target of  attacks. Above all in 2018 when it was the young people who went out onto the streets to demand change. Many of them were members of parish youth teams, who did not hesitate to express and maintain their faith, even when this exposed them to great danger. The CRTN production team saw this as an act of courageous witness, which we should include among our ACN documentaries, since our mission is precisely to make known those places where the Church is facing a situation of persecution or other need.

What would you say if you had to summarise the message of the video in a short phrase?

I would use the phrase we have already used for the title of the documentary, since the entire video is intended as a great prayer for peace in Nicaragua. The idea was to mix the terrible images of violence suffered by our brothers and sisters, along with other scenes in which the whole Church walks on the streets, praying the Rosary, adoring the Blessed Sacrament, singing and celebrating Holy Mass for the sake of peace. These young people are stigmatised on account of their faith, the colour of the clothes they wear and the songs they sing. In this documentary we are appealing for them to be allowed to express their faith freely.

What was your experience of working on this project?
It has been one of the most powerful experiences I have ever had to narrate in a documentary. At times it has been a privilege to be able to meet directly with so many committed young people and with genuine pastors with the ‘smell of the sheep’, accompanying their flocks and with the courage to offer themselves as a bridge in situations where everything seems to be heading for the abyss.

Was there any particular moment that was particularly memorable or moving for you?
There was one interview that I would love to have been able to include, but in the end we decided not to, for the sake of the safety of the young person we interviewed and his family. A young man who was arrested for having taken part in the protest marches told us about the tortures and the other scenes of violence he suffered or witnessed during his detention in prison, and about how these experiences had affected him psychologically. This caused me a great deal of pain. And although it was not included in the final cut, his testimony helped me to appreciate all the more the efforts made by every young person who chose to remain faithful to the Gospel message without fear of the consequences.

There are a number of scenes of violence in the film. Was there any moment during filming when the film crew feared for their own safety?
It was not easy recording the events. The sense of being under surveillance was constant. There was a certain atmosphere of violence in the air and we witnessed situations of restriction and coercion. At one point, when we were recording an interview with a young person in front of a church, we were approached by a group of paramilitaries and very quickly a political patrol arrested the entire film crew along with the young people who were with us and took us to a local detention centre. But trusting in God and thanks to the intervention of the local bishop, we were eventually released after a few hours. Nevertheless, it was an unpleasant situation which really made us feel, directly and personally, the pressure people live under there. 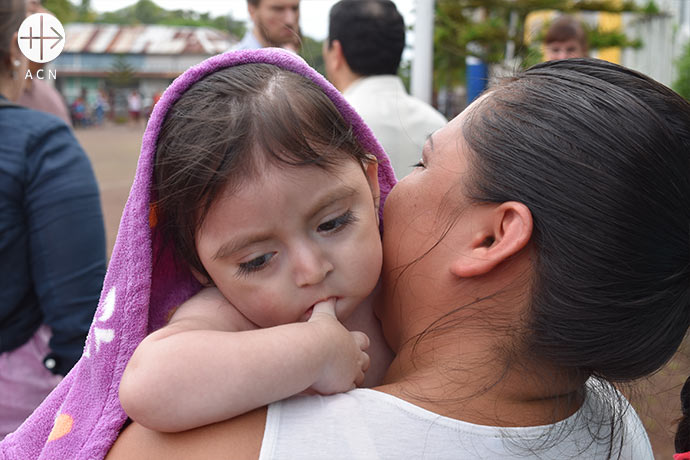 Having experienced the situation in Nicaragua at first hand, would you say that there is hope for a better future for the Christian community there?
The hope comes from Our Lord, who is greater than all evil, and this was also the message I got from everyone I interviewed. I wouldn’t wish on anyone the challenges that these young people have to face in Nicaragua, but I believe we can all learn from the faith and courage with which they live, believing, praying and working for better times. At the same time I also draw hope from the work of ACN, which is working, for example, so that every young person who feels called to serve the Church can find a seminary, meeting house or formation centre where they can fulfil their dream of serving the Lord.

Were you surprised to see the number of young people still attending Mass and publicly witnessing to their love of God and the Church, despite the risk of being attacked or even murdered on account of it?

Yes, I was really impressed, and I think this is the image that I hope will remain in the minds of viewers when they see the documentary. This genuine courage of the young people in defending their faith. One of the young people remarked that his family would be in danger if he were seen in the church, so he had to take part secretly in the group. Other young people have decided to leave the country and leave their families, rather than yield to the pressures imposed on them on account of their faith.