Jacques Mourad lived as a prisoner of the Islamic State for five months before managing to escape to freedom. Now he has been appointed Syriac Catholic Archbishop of Homs.

“Aid to the Church in Need rejoices at this decision. During his ordeal Fr Jacques remained a solid example of Christian values, supporting his faithful and bearing witness to those who persecuted them. As a bishop he is in a great position to continue to encourage Christians to remain in their homelands and be true to their beliefs, but also to engage in dialogue with Muslims, working towards peaceful coexistence”, says Regina Lynch, ACN’s head of projects.

Archbishop-elect Jacques Mourad was born in Aleppo, Syria, in 1968. He did his seminary studies in Lebanon, and has degrees in Philosophy, Theology and Liturgy. He has been a priest since 1993, and speaks Arabic, Syriac, French, English and Italian.

For many priests, being appointed a bishop can be a frightening prospect, but it is hard to scare a man who spent months locked in a bathroom, threatened daily and who was even subjected to a mock execution for refusing to renounce his faith. 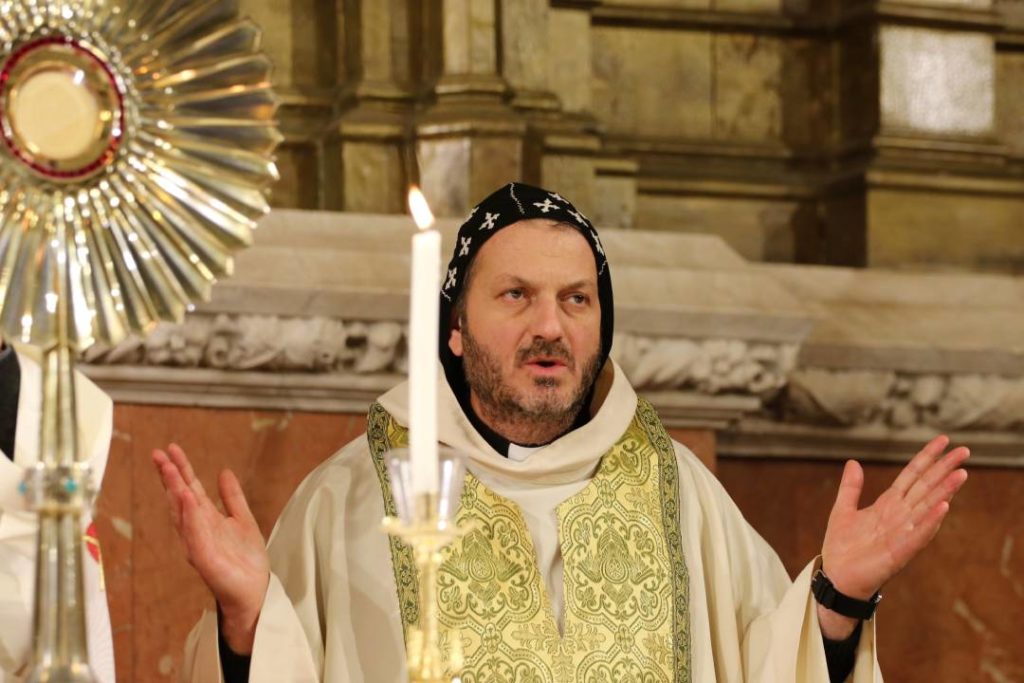 Father Jacques Mourad was head of the monastery of Saint Elias, or Mar Elian, Syria, in 2015, when the region was overrun by jihadists from the Islamic State (IS).

During his time as priest in neighbouring Al-Qaryatayn and Mar Elian he worked closely with ACN, which funded a number of projects, including restoration and construction of infrastructure at the monastery and provision of food, medicine, and other aid to the local population.

Prisoner of the Islamic State

The terrorists first abducted Fr Jacques and a postulant, Boutros, before taking almost the entire Christian population of Al-Qaryatayn, to whom he had ministered as a priest.

The Christians were subjected to psychological and physical torture, but they did not renounce their faith. “I was harangued, threatened several times with beheading, and subjected to a mock execution for refusing to renounce my faith. In those moments Our Lord’s words resonated within me: ‘My grace is sufficient for you, for my strength is made perfect in weakness’. And in the midst of this situation, I was also happy to be able to concretely live these words of Christ from Saint Matthew’s Gospel: ‘Love your enemies, bless those who curse you, do good to those who hate you and pray for those who ill-treat and persecute you’”, Fr Jacques told participants in the Night of Witness, in Paris, 2017, at an event organised by Aid to the Church in Need (ACN France).

Eventually the entire Christian community was returned to what was left of Al-Qaryatayn. The monk was allowed to return to his monastery, and even to conduct religious services, but they were forbidden to leave.

Soon after, however, fearing the situation could again worsen, Fr Jacques escaped. Once freed, he managed to coordinate the escape of the rest of the community. “I asked a Muslim friend there whether he would bring me to safety on his motorcycle. We headed out, straight through the desert, and miraculously nothing happened. Three days later we were able to free 58 people, a few at a time, until all the Christian hostages had escaped through the desert – always with the help of Muslim friends and neighbours!”, he explained in a 2016 interview with ACN.

Fr Jacques moved to Europe for a time, where he advocated for an end to the war and defended a non-violent approach to Christian-Muslim relations, recalling how the peaceful attitude of the small community had surprised and impressed their captors.

Now, eight years after his ordeal, the Syriac Catholic Church to which he belongs elected him Archbishop of Homs, the diocese which includes the monastery of Mar Elian and the community of Al-Qaryatayn. Even though jihadists are no longer an immediate threat, Syria is beset by a deep financial crisis which continues to drive many Christians to emigration.