In a country ravaged by poverty, corruption and entrenched attitudes, the visit of the Holy Father is good news for its people, 58% of whom are Christians.

In the diocesan grounds of  Soamandrakizay, in Androhibe on the southern fringes of the capital Antananarivo, the authorities are preparing a vast 60-hectare site in readiness for the great outdoor Mass which will be celebrated by Pope Francis on Sunday, 8 September 2019. This will be the first visit to the island by a Pope since the visit of Pope John Paul II in 1989.

At that time Lazarist Father Pedro Opeka was already working here and had the pleasure of welcoming the Polish Pope. Speaking to ACN, he explained that people are eagerly awaiting the visit of the present Pope. « It’s going to be crazy! », he says with a smile. « He will be coming here, to the former rubbish tip which we transformed into a village. It’s like a consecration! » . Indeed, it will be a blessing that will set the seal on a project initiated on behalf of the poorest of the poor back in 1989, the very year of the visit by Pope John Paul II, and which in the 30 years since then has helped over 500,000 destitute people. 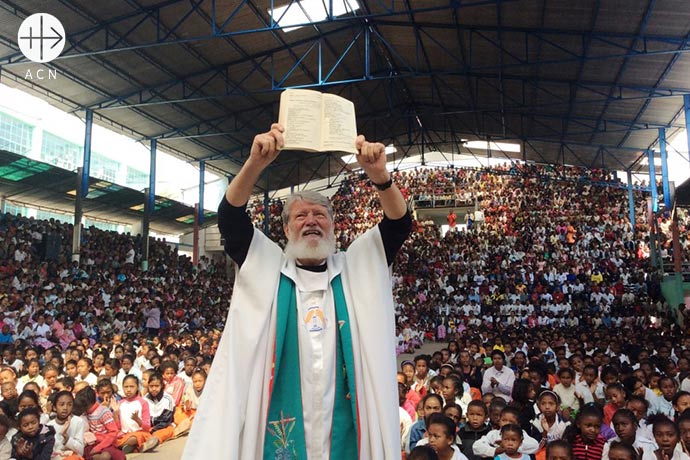 The fifth poorest country in the world

As someone who has known Malgasy society since 1975, Father Pedro is able to paint a portrait that contains both light and shadows. Madagascar was already poor when he first arrived there; however, he has seen the poverty actually increase since then. The throngs of simple country people who made up the majority of the population of the island at the time are rubbing shoulders today with urban dwellers struggling to find work. Tensions are growing. “30 years ago I could travel wherever I wanted on my adopted island”, Father Pedro recalls. “Today that’s no longer possible, given the situation in the country, which is bordering on civil war.” Currently Madagascar is the fifth poorest country in the world according to the IMF. The Church and its missionaries represent a last fragile bastion against the vast wave of poverty that is sweeping across the country. “They are the only ones preventing the country from falling apart”, he insists.

Nonetheless, he explains that the Madagascans are a resilient people, and there is still a possibility that the situation could change for the better. “Wherever I go, people ask me if I can give them work. They have no higher expectation than that! They have an incredible energy to offer.” In his view the island has suffered above all from its abandonment by the politicians. For although the land beneath their feet is rich with mineral wealth, especially aluminium and nickel, barely 1% of this wealth comes back to benefit the country as a whole. “At a broader level there is a mentality of entrenched thinking, of institutionalised corruption, which continues to undermine the future of Madagascar”, Father Pedro laments.

The hour of truth for the island

He does, however, see a possible hope in the new Madagascan president, Andry Rajoelina, who was elected in 2018. This youthful head of state, born in 1974, gained the votes above all of the ordinary people in society, and he has promised them that he “will not forget them”. For his part, Father Pedro is willing to give him a chance, but he warns, “I’ll give him two years to see what he does in practice… If he doesn’t improve matters, then I will never believe another political leader again.” Many other people appear to share the cautious view of Father Pedro, for whom the country now has its back to the wall. “If reforms are not made, then Madagascan society will explode”, he believes.

The same concern about the situation in the country is shared by Franciscan Father Jacques Tronchon, whom ACN is currently supporting in an impressive project for the rural reintegration of Malgache families living in great poverty and inhuman conditions in the great suburban slums around the capital. “The struggle against extreme poverty which has been on-going for a long time now in Madagascar is still a major challenge today. The excesses of various different governments have only increased the difficulties, whereas this large country is full of potential and can claim some major successes in several regions. But the ancient antagonisms between the different regions in the country and the economic situation resulting from the power struggles between the major political forces – to say nothing of the climatic problems linked to the seasonal cyclones – make it very difficult to achieve a harmonious development of this beautiful country”, he says. 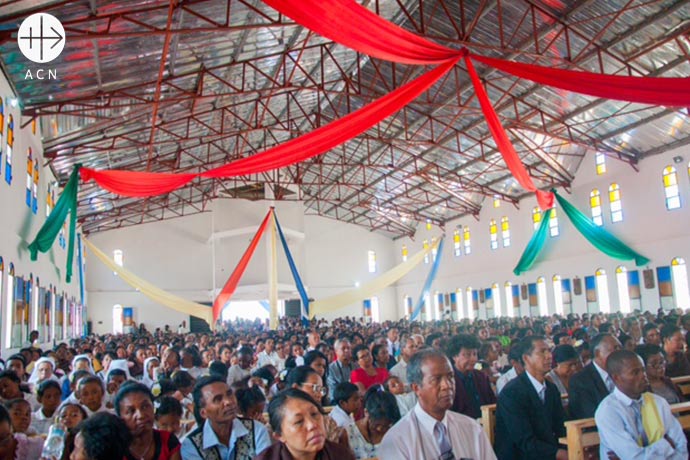 The country is indeed divided, including along religious lines. The ancestral pagan religions still have great influence in society and at the same time all kinds of different sects, often rival ones, are proliferating alongside the major Christian denominations. Although, as Father Jacques explains, “the leadership of the Catholic Church is very much in evidence thanks to the powerful presence of the dioceses and the many different religious congregations, along with the social projects they have developed in every different field.”

But despite all the differences, he is convinced that “without a doubt, there is a whole People of God who will come from every corner of this great island to welcome Pope Francis and give thanks together with him.”

The apostolic visit of Pope Francis to Madagascar will include a time of prayer together with the contemplative religious from all over the island. This will take place in the chapel of the Carmelite sisters of Saint Joseph of Antananarivo.  Sister Maria Maddalena, the prioress of the Carmel of Saint Joseph of Antananarivo in Madagascar, expressed her joy: “I must share this good news with you so that I can thank you once again for all you have done for our community and so that you too can share in our joy in welcoming the Holy Father”. The roof of this chapel was in fact repaired with help from ACN, so that it can be in a fitting condition to welcome the Pope. As Sister Maria explains, “The visit by Pope Francis is a great grace for us, and I see more and more people coming to visit us each day. I’m sure that this visit will bear much fruit, and we owe this to the generosity of our benefactors, which is why I want to express all my gratitude towards them.”

During the past year 2018 ACN supported the work of the Church in Madagascar to the value of over 1.1 million Euros.

Mozambique |
17 February, 2020
Mozambique: Cabo Delgado Province – continuing attacks “a tragedy” says Bishop of Pemba
The continuing attacks in northern Mozambique have already claimed over 500 lives and left thousands displaced, according to Bishop Luiz...
Venezuela |
14 February, 2020
Cardinal Porras: "We want a way out of the situation in Venezuela, one that is peaceful and democratic, without the language of war.”
Venezuelan Cardinal Baltazar Porras said during a press conference at the ACN Foundation's headquarters in Spain that "real changes are...
Egypt |
14 February, 2020
Egypt: Martyrs’ shrine honors 21 victims of ISIS on fifth anniversary of their death
The shrine to the 21 Christian men beheaded by ISIS on a Libyan beach in February 2015, will hold an...