The first step in the reconstruction of 97 damaged houses belonging to Christian families uprooted from Homs was celebrated in a special ceremony on May 1, the Feast of Saint Joseph the Worker. The international Catholic pastoral charity and pontifical foundation Aid to the Church in Need (ACN) is supporting this ecumenical project with 300,000 Euros.

During the celebration on May 1 in the Syrian Orthodox Cathedral of Um Al-Zehnar, the owners of the houses were each given a small piece of rock as a reminder that “Jesus is my rock”, the solid foundation stone on which they can all trust and rebuild their future.

ACN has already supported the reconstruction of another 110 homes in Homs. Nevertheless, this is the first truly ecumenical project, since the 97 families being helped by this project “Jesus is my rock” belong to different Christian denominations and rites, both Catholic (one Maronite family and 26 Greek Melkite families), and Orthodox (11 Greek Orthodox and 59 Syrian Orthodox families). The Reconstruction Committee expressly wanted to reflect in this way the diversity of Christian rites within Syria.

Present at the ceremony were the Greek Melkite Archbishop of Homs, Mgr. Abdo Arbach, and the Syrian Orthodox Archbishop Selvanos Boutros Al-Nemeh, who gave their blessing on the Christian families who had suffered so much during the war and encouraged them in this work of reconstruction. Work will begin in earnest in Homs very soon, and it is expected that the 97 houses will be finished by the end of the summer.

“If the Lord does not build the house, in vain do the builders labour” (Psalm 127:1)

In the course of the ceremony, Father Andrzej Halemba, the representative of ACN for its projects in the Middle East, re-emphasised the importance of building with faith and trust in God, because “if the Lord does not build the house, in vain do the builders labour” (Psalm 127:1). He urged the people to renew their gratitude to God, who cares for each individual person, and he asked them to remember the benefactors of ACN in their prayers.

After the ceremony, one couple, Aziz Al Houri and his wife, spoke to ACN: “We thank you for what you are doing. We are so happy for our children. For we are going to return to our own home!” Another young expectant mother expressed her enthusiasm at the thought that she can now hope to be able to give birth to her new child in her own home, which is also going to be rebuilt. “We can’t wait for the moment when we can return home; and God willing, it will be soon!”

The houses that are due to be rebuilt in this phase are all partially damaged. Structural engineers are on the spot, evaluating case-by-case the need for rebuilding work. Hala Mashhour, a young volunteer architect who is helping on the project, expressed her view of the work. While not concealing the difficulty of the challenge before them, she underlined its importance for the local community. She also told ACN how happy she was to be able to contribute to the well-being of her own country and above all her own city. “This project fills me with enthusiasm”, she said, “because I would love to see Homs with a new face and her former beauty restored.” Her own family is currently still renting a small six-person apartment that is costing around 50 US dollars (25,000 Syrian pounds) a month.

Homs is the third largest city in Syria. Strategically important, it was for years at the centre of the struggle between the government and the opposition forces. The war in Syria is not over yet, but here at least, things are improving and daily life in Homs is returning to some extent to normal. Nonetheless, there are some parts of Homs that remain in ruins ever since they were destroyed, such as the district of Al Hamidieyh, for example. 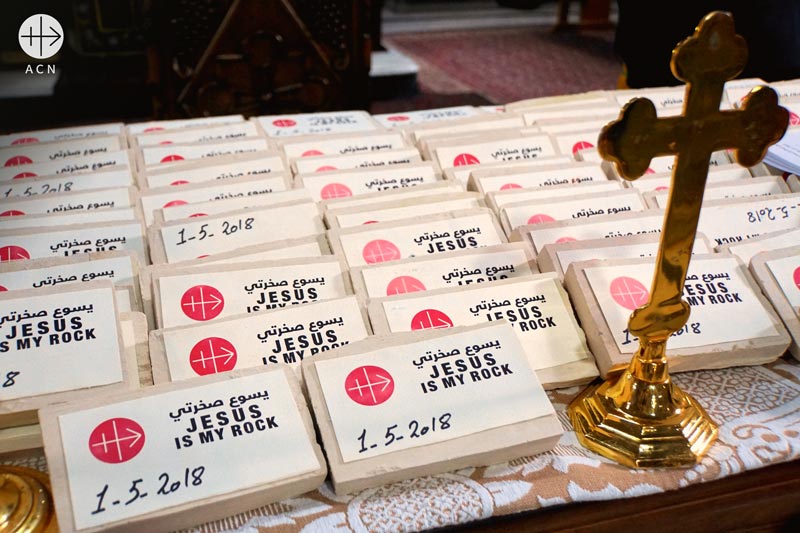 97 houses is not many, compared with all those that still need to be rebuilt, but nevertheless it is a concrete signal of hope. The aim of the project is to prioritise those Christian families of the various different rites who are in the most difficult situation financially and cannot pay rent, but who are at best surviving on the charitable aid of the Church. But these Christians want to return to their homes, and this is a real sign of the will to rebuild the Christian community in Homs. Rebuilding their ruined homes is the key to achieving this. Many of them ardently desire to return home and in some cases are only waiting for the school year to finish before doing so.