It was a low-key, private pilgrimage. On the first Sunday of August Father Pier Luigi Maccalli visited the shrine of Fatima in Portugal to thank Our Lady for his liberation last October, after almost 2 years of captivity at the hands of a jihadist group in Africa’s Sahel region.

In an exclusive interview with the international Catholic pastoral charity and pontifical foundation Aid to the Church in Need (ACN Portugal), Father Pierluigi, an SMA missionary priest, also reminded us about the case of Sister Gloria Narváez Argoti, the Colombian religious sister still held captive by the jihadists after over four years. Father Pierluigi asks for all our prayers, that she may soon regain her liberty.

During the interview with ACN, Father Pierluigi, accompanied by his brother, Father Walter Maccalli, also a priest,  and Portuguese missionary Sister Alexandra Almeida – both missionaries in Liberia – expressed his concern about the health of Sister Gloria. “Every day I pray for this religious sister, who after four and a half years still remains in the hands of her abductors. I suffered two years of imprisonment, and it was a long time. She has spent twice as long; she is a woman, and she is alone. I believe that she needs a great many prayers. I ask everyone to pray every day for her and for other prisoners like her, that her liberation may come soon.”

HIS MOST DIFFICULT MOMENT

“I think the most difficult moment for me was when they handcuffed me. I recall the date: it was 5 October  2018, after having taken me by motorbike right the way across Burkina Faso. On that particular day we arrived at a cave, and it was there that they handcuffed me to a tree. It was a very uncomfortable moment. I wept, and I cried out to God “My God, my God, why have you forsaken me?”

“I believe they [the terrorists] were well organised, for my abductors in Niger were young Fulani men from an area close to Burkina Faso. The day after I was abducted, I could see them telephoning. Without doubt they were giving details about me and were given orders to take me in the direction of Mali. When I asked them where they were taking me, they told me “To the Arabs”.”

“The Arabs” were people living in Mali. And they did in fact deliver me to these Arabs, who then took me by car into the Sahara Desert. A year later they took me to another area where there were Tuareg people. In the first video they made, on 28 October, they told me to say that the first group that had abducted me were called the “Group for the Support of Islam and the Muslims”. This is a group that includes various other associations linked to Al Qaeda.”

“I have asked myself many times why they abducted me – what I had done, what I had said to cause this. I have not been able to recall anything I may have said or done in any way to offend anybody. There’s nothing I can think of that I might have done. I believe it was simply that the mission in Bomoanga is an isolated mission station, from which it is easy to abduct someone and then disappear into the forest.

There are no police, there is no one guarding the mission, no such thing as a guard dog. It is a mission open to everyone, as befits our missionary approach of being among the people, close to the people and with people. We are easy prey for unscrupulous people with evil intentions.

THE JIHADIST THREAT ON THE AFRICAN CONTINENT

“The Church was born of persecution, right from its beginnings. From every trial a new community is born, a new awareness. I’m quite certain that this difficult time – for me, for my community and for many communities in Africa that are going through this time of terrorism – will bear fruits of peace, fruits of liberty, fruits of new life, and perhaps also a new self-awareness in so many communities that are currently being put to the test.

I am in contact with my communities in Africa, and they tell me that they are living very much in this state of insecurity. They are often told not to gather together in groups in order not to give the impression of provocation. They pray in their own homes. Some of them have been forced to abandon their villages, but they keep on praying, hoping and asking me to continue supporting them during this time of trial. We need to pray together that peace may truly reign and that the Kingdom of God may come with power.” 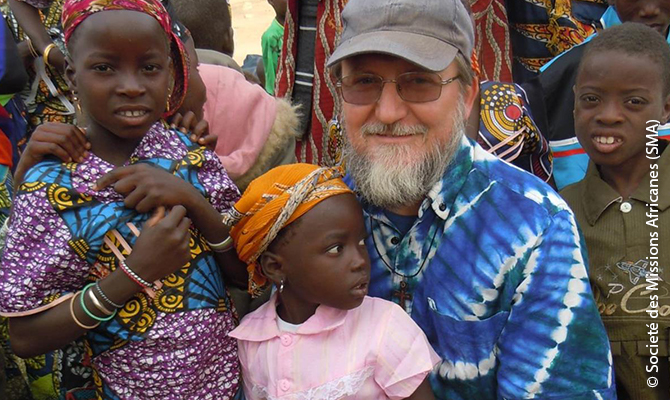 A ROSARY MADE OF FABRIC, HIS “COMPANION” DURING CAPTIVITY

“Yes, I made a rosary out of a piece of cloth, from the head covering that protected my head from the sun, and every day I prayed to Our Lady, Untier of Knots, entrusting this great and knotty problem to her and asking her to intercede for my liberation, for my family, for my community and for peace in the world.

The Rosary was my constant companion throughout my time of captivity. I often say that Mary and the Holy Spirit sustained me during that difficult time when I experienced the dark night of the soul and felt the silence of God. Yet at the same time, prayer gave me strength each day.”

“I owe a debt of gratitude to Mary and especially to Our Lady of Fatima, because my liberation happened on the feast of Our Lady of the Holy Rosary. I was actually released on 8 October 2020, but it was on the evening before, the evening of 7 October, the feast of the Holy Rosary, that I was given the news: “Libération. C’est fini“. Freedom. It’s over.”

It was this connection, even if only a symbolic one, that I wanted to honour by coming to Fatima at this time to pray the Rosary and thank Mary for her intercession, to thank God for my liberation, which was, I believe, the fruit of so many prayers – not only mine but those of my family, of my people. Every day, since my abduction, they have been praying the Rosary every evening, in my country and in my diocese. Throughout those 17 months they made pilgrimages, held times of prayer. And I know that people also prayed in other parts of the world. There was a river of prayer. I believe that it was prayer that opened the door to my liberation.”

THANK YOU FOR ALL THE PRAYERS

“For my part I want to thank everybody who prayed and supported the Church in various different ways. For the prayers of so many monasteries, families and households. There were others who helped by giving financial support, those who also helped with their friendship. I would like to give thanks via ACN to all those who worked for my freedom.

Let us continue supporting the Church and all the communities that are going through a time of Calvary, through times of difficulty. We are close to one another through prayer. Thank you to everyone. With all our hearts, let us remain united in prayer. Many thanks to everyone from me personally!”