Bartholomew, a father of seven children, was born in Dablo, in the north of Burkina Faso. He was a simple peasant farmer and kept various kinds of livestock. His family lived in peace. Although the Christians were a minority in Dablo, there was a Catholic chapel, and in 2013 a parish house was also built. It was a historic moment for the entire Christian community because it was now finally possible for the priests to come there and help the eight catechists who were ministering to the community. Dablo is situated in an extremely poor and drought-ridden region of the country where crops are scanty owing to the low rainfall, but there was no sense of any danger for the Christians living there when the parish was established. “Our life in Dablo was peaceful. Not easy, but friendly and peaceful”, Bartholomew recalls.

But the crisis spreading from neighbouring Mali and the incursions of terrorist groups of a Jihadist stamp began to infiltrate a form of radical Islam which undermined the existing social cohesion. In 2019 the Christians began to be deliberately targeted by the Jihadists with the aim of destabilising the country. Killings, abductions, intimidation and threats began to multiply everywhere. 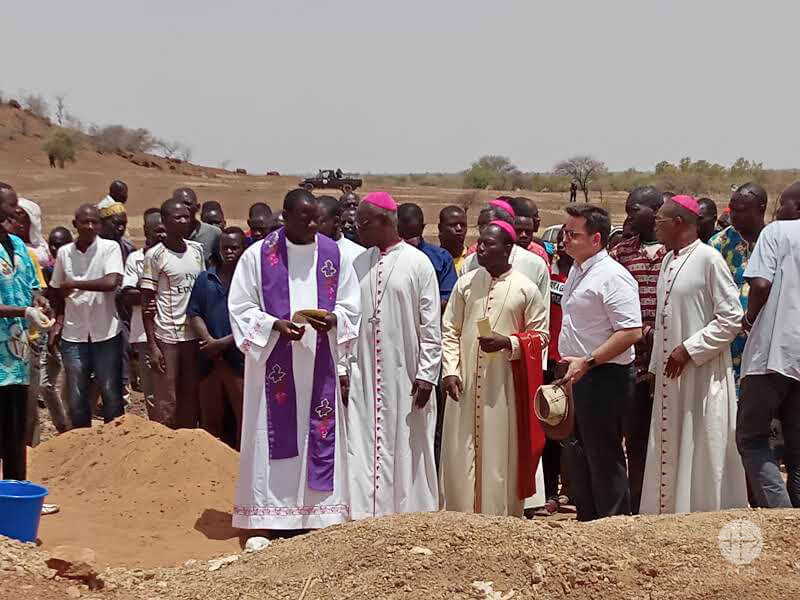 On 12 May 2019, a Sunday, Bartholomew was at Mass with his family. “The terrorists surrounded the church and forced their way in, fully armed, shooting at us. They killed five people, and the priest as well. I can still see their faces. Some of them had revolvers, others held steel bars in their hands”, he explains as he relates his harrowing experience to representatives of the international Catholic pastoral charity and pontifical foundation Aid to the Church in Need (ACN International).

“After that, they dragged everything together, the benches, liturgical items and books, in the centre of the church and set fire to it. They ordered all the women to cover their heads and stole our motor cycles. We ran out of the church. I can only thank the Lord that they didn’t kill me and my family as well”, he recalls. 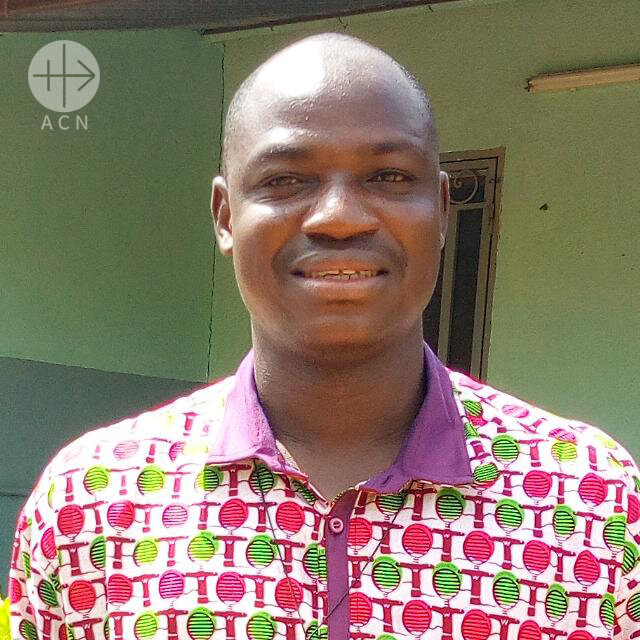 The priest they murdered was Father Simeon Yampa, who had arrived in Dablo in September 2018. That Sunday, as it happened, was Good Shepherd Sunday. Those who were present recalled how their priest, instead of running away, attempted to mediate, and this cost him his life.

The next day the family fled – the father on a bicycle, his wife, Antoinette Sawadogo, and the children in a car. “I had to leave behind eight cattle, fifty goats and all my chickens. Everything ended up in the hands of the terrorists. We arrived here, 120 miles (195 km) from Dablo. We came to Ouagadougou, because it is where my eldest son lives. He came here to study and then stayed on.” One of Bartholomew’s brothers chose to stay in Dablo. A week later the terrorists abducted one of his sons.

Burkina Faso has been living through this silent torment for years now. It is a slow agony that has prompted an exodus of over 1.3 million internal refugees.

Most of those who have fled are now either sheltering in refugee camps or have been taken in by relatives or other generous families. Like Bartholomew, those who fled had to abandon everything – food, land, savings and possessions.  The local Church is endeavouring to alleviate the suffering of these uprooted people all over the country. 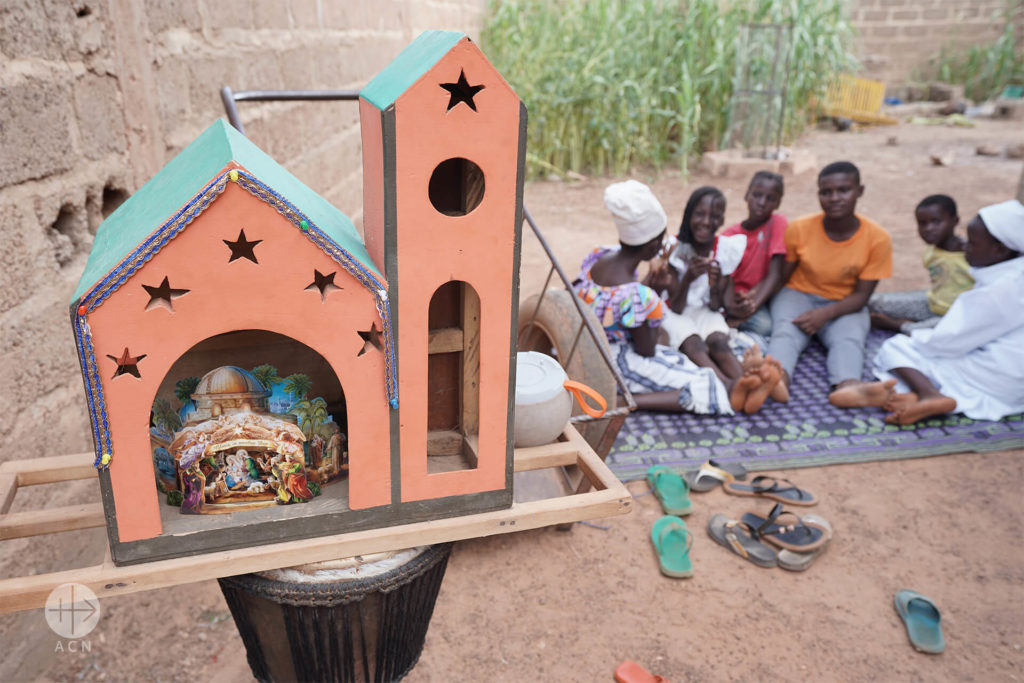 Many of the refugees who arrive are fearful and despairing. The parish teams and their coordinators are organising the aid, and the local basic Christian communities are in direct contact with the refugees and the needy. Also in Ouagadougou. “The situation arose quite suddenly. It wasn’t easy for us. We had to improvise and organise ourselves rapidly. We endeavoured to find solutions to contain the situation and palliative measures to ease the crisis. Some of the refugees died. Most arrived with absolutely nothing. We tried to give them what they needed, and at least they survived. Now the future is in God’s hands. We are doing everything we can at our own level, and the parish is trying to provide food, thanks to the donations we receive”, explains Leon Emmanuel Baii, one of the leaders of the small local basic communities.

“In Burkina, traditionally, on Christmas Day the parents would try to organise a family celebration, because Christmas is the feast of the children”, Bartholomew explains. “After Mass, the parents would prepare dishes of rice and other things and we would all visit one another dressed in our best clothing. The children would make Christmas cribs which they took round all the houses, singing and praising the Lord. It was a very beautiful feast”, he recalls nostalgically. 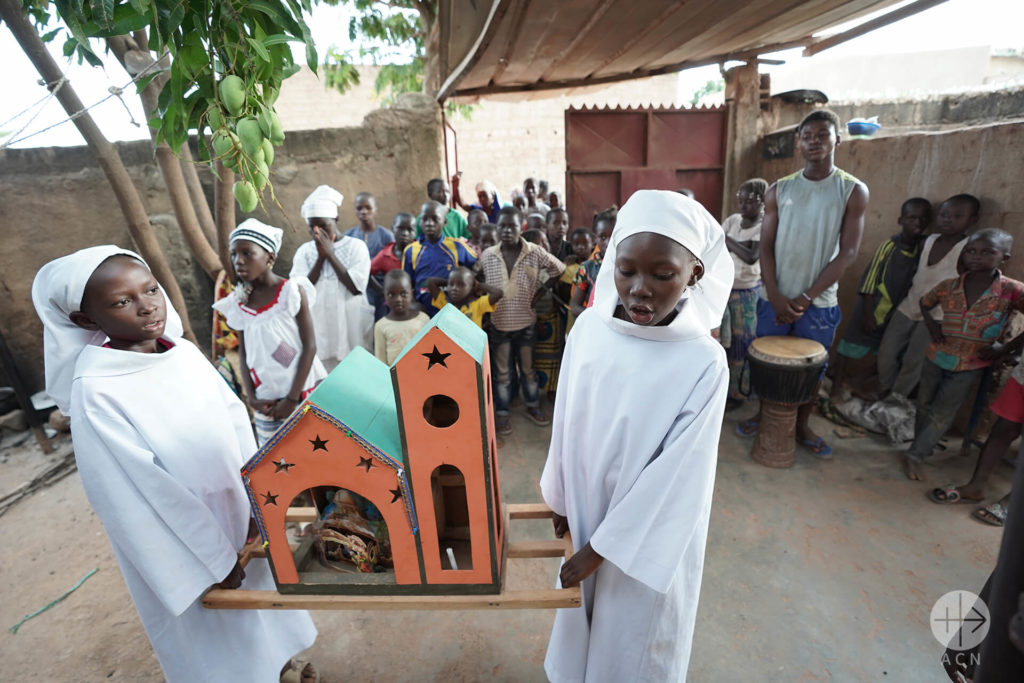 So how will they celebrate this Christmas in Ouagadougou, Dori or Ouahigouya? “We are one big family; we live as God has taught us, not only with the other Catholics, but accepting everyone and living in friendship with all around us. We welcome everyone who comes, including Catholics, Muslims, Protestants and animists, we include them all just as they are. They are very happy with the welcome we give them, but there is still something missing. It is not easy, there is always a shortage, because we ourselves don’t have enough for our own needs. But the little we have we share with them all”, Leon explains to ACN.

In Ouagadougou and throughout the country, this Christmas will no doubt be characterised by the face of Christ in that of our refugee brothers and sisters. And the Christmas cribs that the children carry from house to house will likewise recall how the Child Jesus, when He came on earth, also had to live by the charity of the shepherds and humble people.