Menu
Menu
Home > Archbishop Alberto Ortega, Nuncio in Iraq and Jordan: “It is not possible to imagine the Middle East without the Christians”
Donate
Menu

On Wednesday 4 July the papal Nuncio in Iraq and Jordan, Archbishop Alberto Ortega, visited the Spanish national office of the international Catholic pastoral charity and pontifical foundation Aid to the Church in Need (ACN) in Madrid. During his visit here, his own native city, Archbishop Ortega underlined the importance of the Day of Reflection and Prayer that Pope Francis will be celebrating tomorrow Saturday, 7 July in Bari, Italy, together with all the Patriarchs and Heads of the Eastern Churches in the Middle East. The meeting will also address the complicated situation of the Christians in the region.

It is a gesture intended to “look to the East”, he explained, “the place where the Christian faith was born, where we should be living in peace, and yet there are conflicts. A place where Christians are called to fulfil a most important task.”

For the Archbishop, as Nuncio in Iraq and Jordan, the calling of this meeting is “a very beautiful gesture, for the value of prayer that it contains, which is the most important thing – all praying together: Catholics, Orthodox, Christians of other faiths… They will pray together, and indirectly they will be calling the attention of the international community to the need to support peace and development in these countries, and to support the Christian presence as a positive element for all sides.”

“It is not possible to imagine the Middle East without the Christians”, Archbishop Ortega added. “It would not be the Middle East; it would be something else, and so it is very important to maintain this gesture, whereby communities of different faiths can live together, mutually respect one another and build up the country together.”

In the Middle East, he explained, Christians have always had the mission to be “instruments of peace and reconciliation, of unity and development. It is a mission that requires us to be silent witnesses, since over there we cannot openly preach the presence of the Lord.”

And yet, “this very simple and very discreet mission can transform the situation and touch people’s hearts”, he observed. “And it is revealed in the various activities of the Church – her schools, dispensaries, hospitals; all the charitable activity of the Church.”

A new cardinal welcomed by Muslims too

Archbishop Ortega had just returned from Rome after taking part in the Consistory for the creation of the new cardinals, among whom was the Chaldean Patriarch, Archbishop Louis Sako.

In his estimation, this gesture by Pope Francis is a gesture of “support for the Christians of Iraq, of all the Middle East, of the entire region”, and news of it has been received with great gratitude and joy. 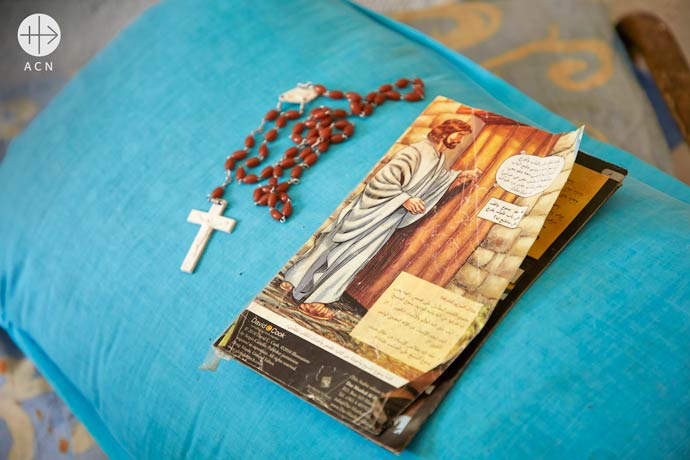 “The news was very well received, not only by the Christians, but also by many Muslims. There have been a huge number of expressions of appreciation and support sent to the Patriarch by the Muslims, starting with the President of Iraq, the Iraqi Prime Minister and the Minister of external affairs, and also including ordinary people who have seen this appointment as a gesture of closeness by the Pope for the country and also for the Christians.”

The new Cardinal Louis Sako will now have “a stronger and more sustained voice, with still greater moral authority” for the support and defence of the Christians in this country, the papal Nuncio affirmed.

Almost half the Christian refugees have now returned

Speaking of Iraq, the Nuncio confirmed that the situation in the country is now “somewhat better” and that little by little the Christians are returning to their former homes on the Niniveh plains, “thanks to the support of organisations such as ACN and others, and of some national governments”, he added.

“Almost half the Christians have now returned to their homes, and this is good news”, he said. “In Qaraqosh, the town with the largest Christian population, over 5,000 families have returned, and little by little, in some of the Christian villages, life is beginning to resume its normal pattern.”

Nonetheless, he added that “much remains to be done” and expressed his hope “that the aid may continue to come in, because people can return only if they have homes and can find work – and consequently it is essential to continue the international aid, and the support of the Church, for these people have lost everything for the sake of their faith.”

The simple truth, he said was that the Christians of Iraq simply wish “to be fully recognised as citizens, with the same rights and duties as the rest of the population, and to be appreciated for the work that they do on behalf of all. Very often it is the Muslims themselves, their own neighbours, who tell them they want them to stay and not to go away, because things are better with them there.”

In the view of the papal Nuncio, the Christians of Iraq have given two important lessons to the entire universal Church: “the value of the faith, and their union with the Lord, for the sake of whom they have lost everything without a second thought and given up their homes and their work…”

And then there is their “spectacular lesson of forgiveness. To hear these Christians forgiving and praying for those who persecuted them is a testimony to the action of the Lord. Humanly speaking, it is extremely difficult to forgive someone who has driven you out of your home, who has caused you to lose everything or murdered one of your loved ones.”

From 2011 to June 2018, ACN gave almost 40,1 Million Euros for pastoral projects and emergency aid in Iraq. In 2017 alone ACN gave 9,3 Million Euros. The pontifical foundation is the most actively involved aid organisation on the Nineveh Plains.