The region between the Tigris and Euphrates rivers, historically known as Mesopotamia, is often called the cradle of civilization. The Christians of Iraq are one of the oldest continuous Christian communities in the world, since Christianity was brought to Iraq in the 1st century.

Iraq is currently struggling to rise from the rubble left behind by the Islamic State during the years of siege. But corruption in government and administration is making reconstruction efforts difficult. Two out of three Iraqis are unemployed. Six million people are dependent on outside support.

When one realises that at the end of the civil war and the reign of IS terror only 10% of the once 1.5 million Iraqi Christians live in the country, one can clearly see how today’s Christian Church in Iraq has been bled dry. Nevertheless, there is a new glimmer of hope among the faithful. Bishop Warda puts it in a nutshell: “We are a Church of martyrs, but every martyrdom is followed by a resurrection.”

Emigration of Christians from the Middle East

Most important factors behind Christian exodus from the Middle East impacting the number of Christians in the Middle East:
• serious and long-lasting military conflicts
• socio – demographic and economical situation
• influence of Muslim political and legal mentality
• emergence of new Islamist movements
• full citizenship rights refusal
• reemergence of political Islam, that led to the formation of Islamic State in Iraq and Syria (ISIS)

Christians in Iraq according to their denomination

• Christians are overwhelmingly the descendants of the original inhabitants of the Assyrian Empire, a civilization that lasted from the 25th century BC until the 7th century BC. They are indigenous Eastern Aramaic-speakers.
• The most widely followed denomination in Iraq is the Chaldean Catholic Church, however, other communities of Syrian rite play an important role.
The other rites, as per Armenian, Byzantine (Melkite) and Latin also being present. 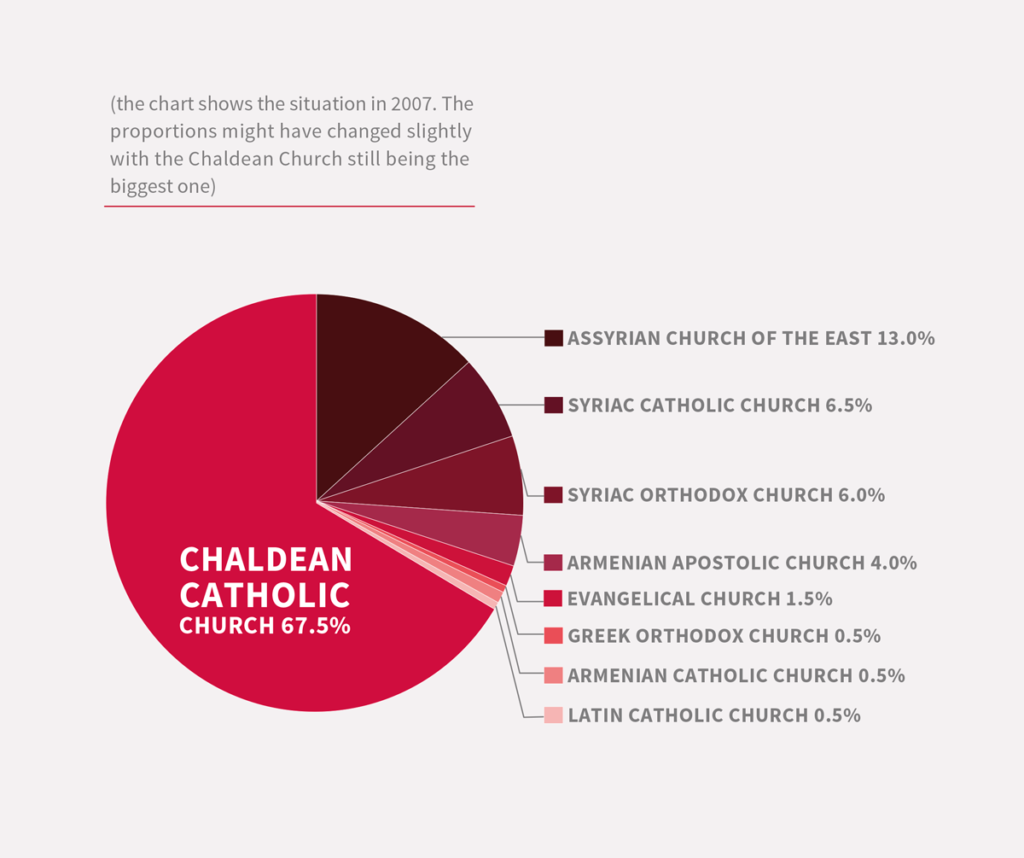 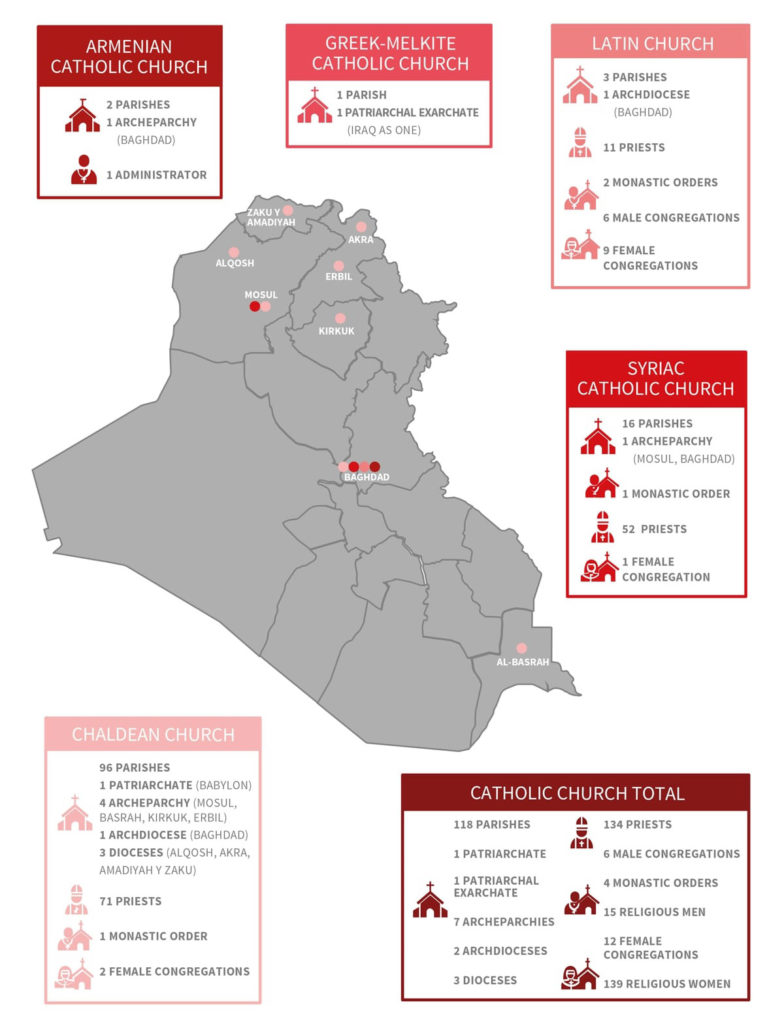 June 29th 2014: The so called Islamic State officially announces the reestablishment of the Caliphate

2- Death by the sword in the events of the so called Jizya not being paid, Jizya is a per capita tax for non-Muslims.

On the 6th of August 2014 ISIS advances in the Nineveh Plains forcing between 100.000 to 120.000 Christians to flee, mostly to areas under Kurdish control. 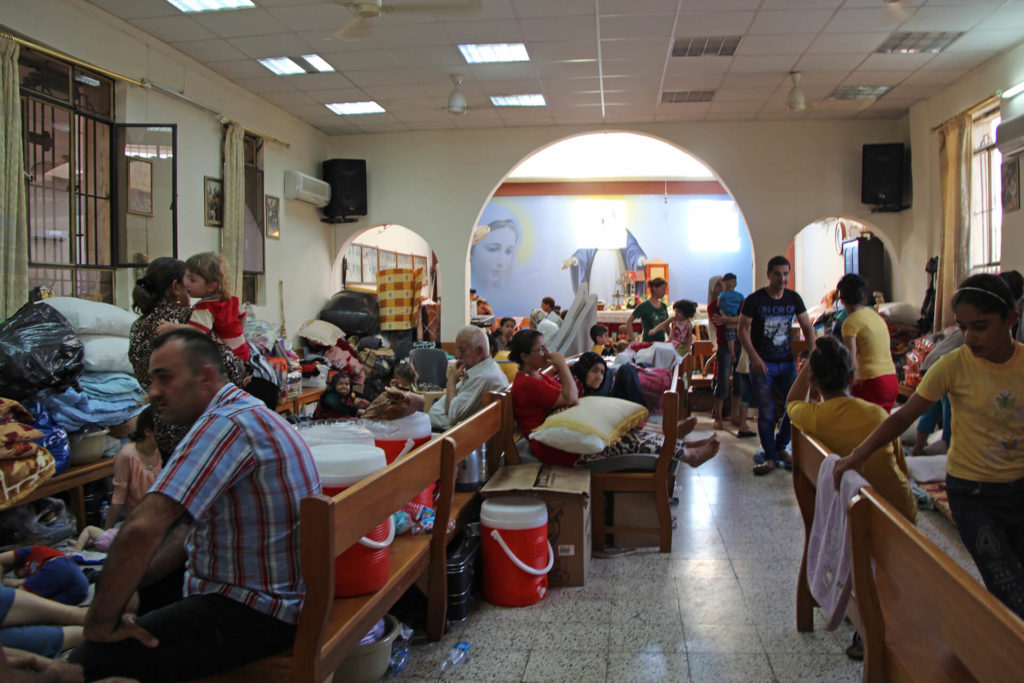 The aftermath of the 3-year war against ISIS (1)

NOTE – the following statistics are not just for Christians but for the whole population. 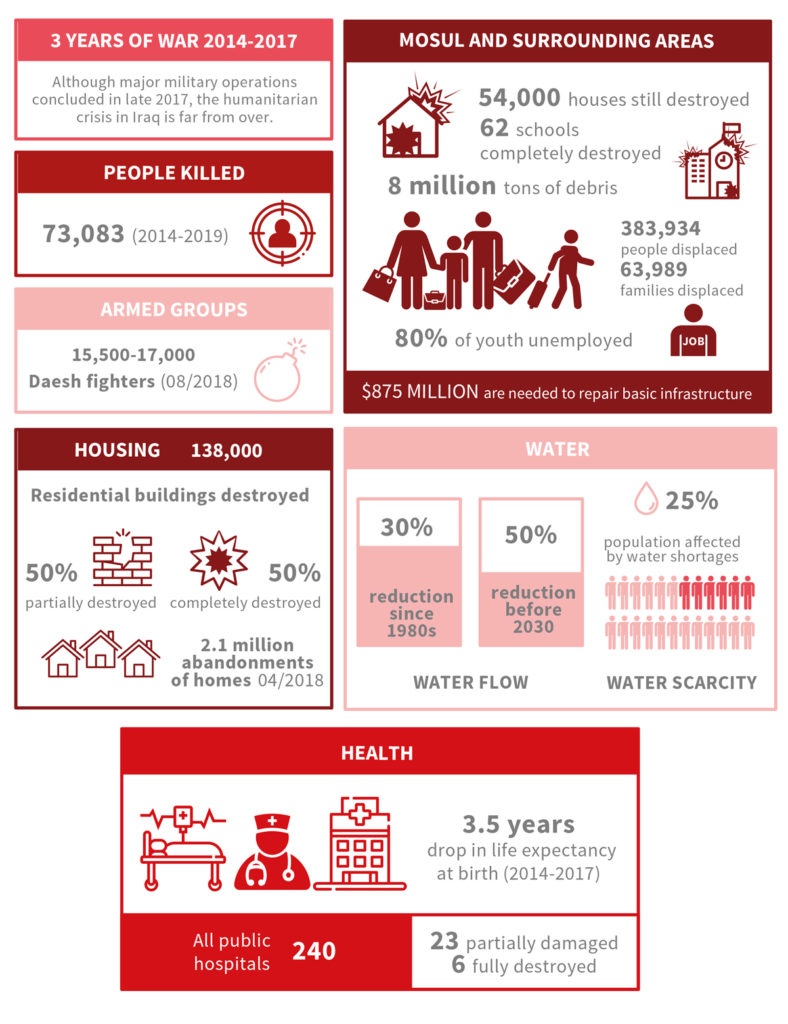 The aftermath of the 3-year war against ISIS (2) 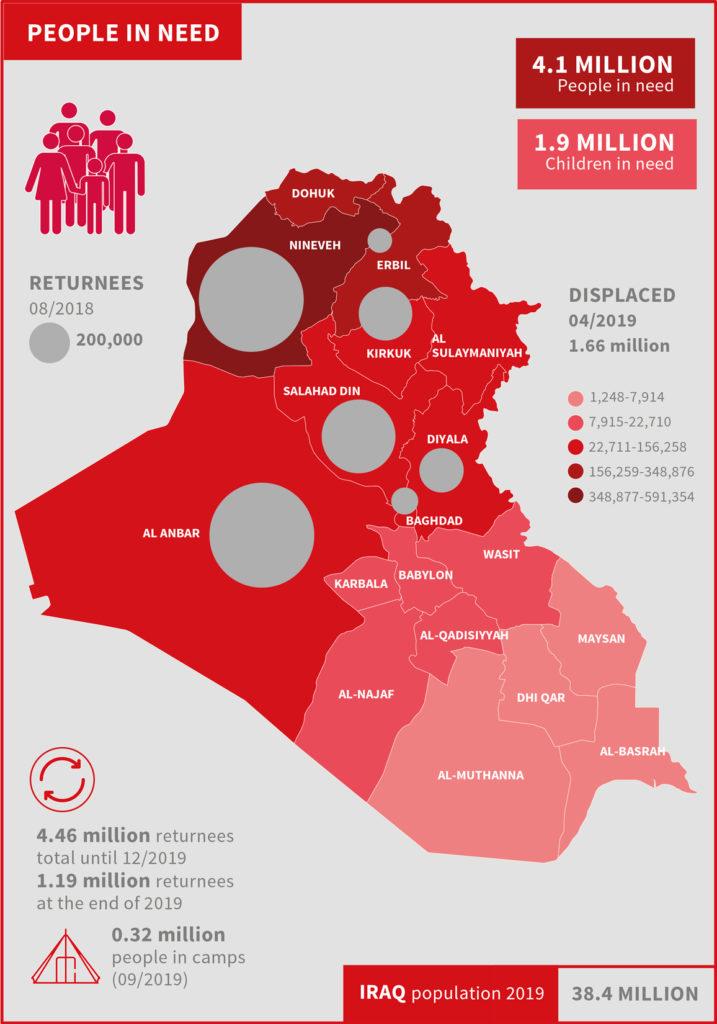 The aftermath of the 3-year war against ISIS (3) 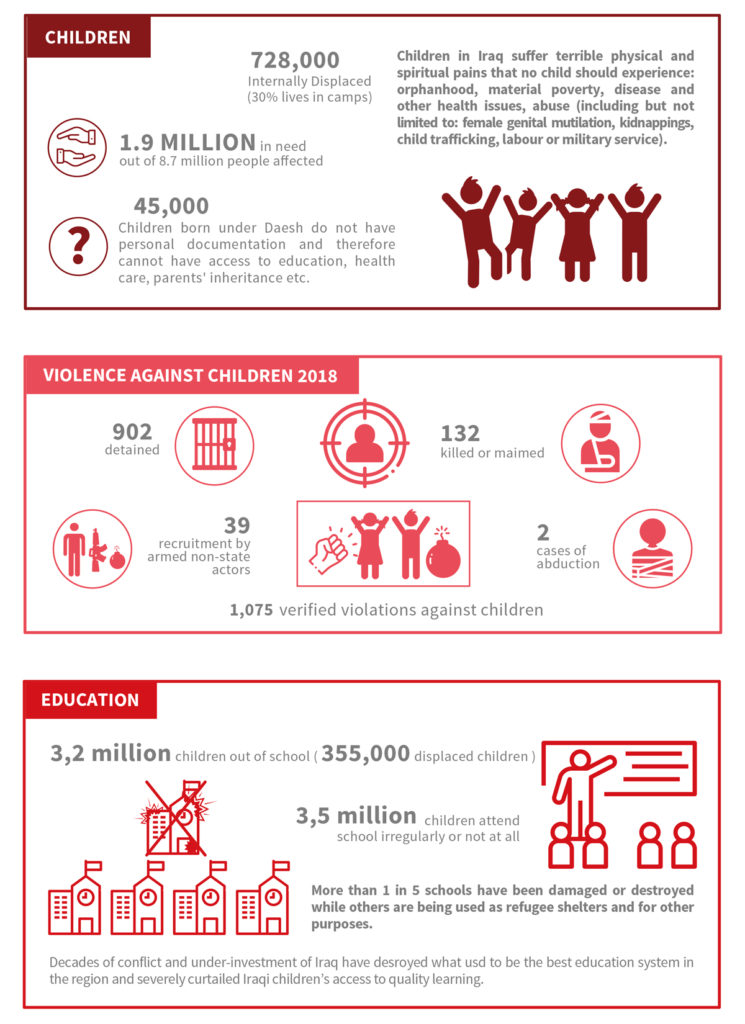 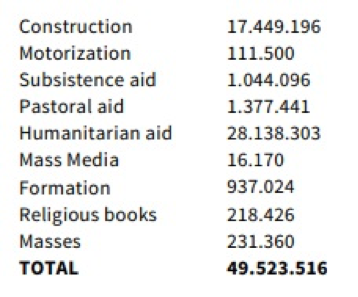 From 2014 to the end of 2020, ACN’s benefactors provided € 48,23 million to maintain the Christian presence in Iraq and in particular in the Nineveh Plains. After the defeat of ISIS, ACN’s spending policy and support has shifted from emergency aid to reconstruction and rehabilitation projects.

2- to secure the presence of a permanent cluster of Christians through efforts aiming at legal protection of Christians and other minorities, their fundamental human rights, especially equal citizenship

3- to secure the thriving of the Christian minority through funding and support of education and development projects.

The return of the Christians 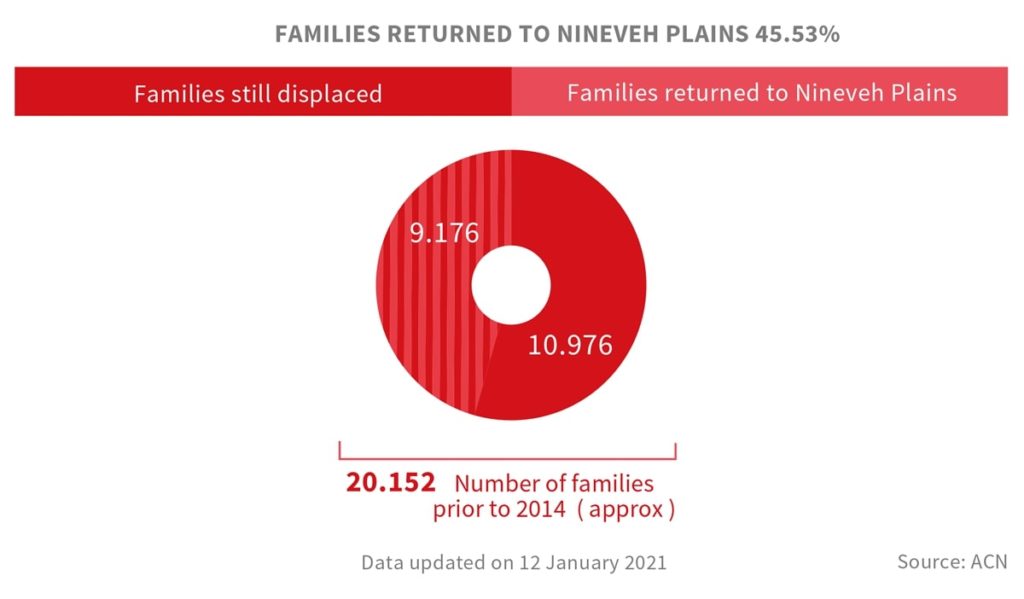 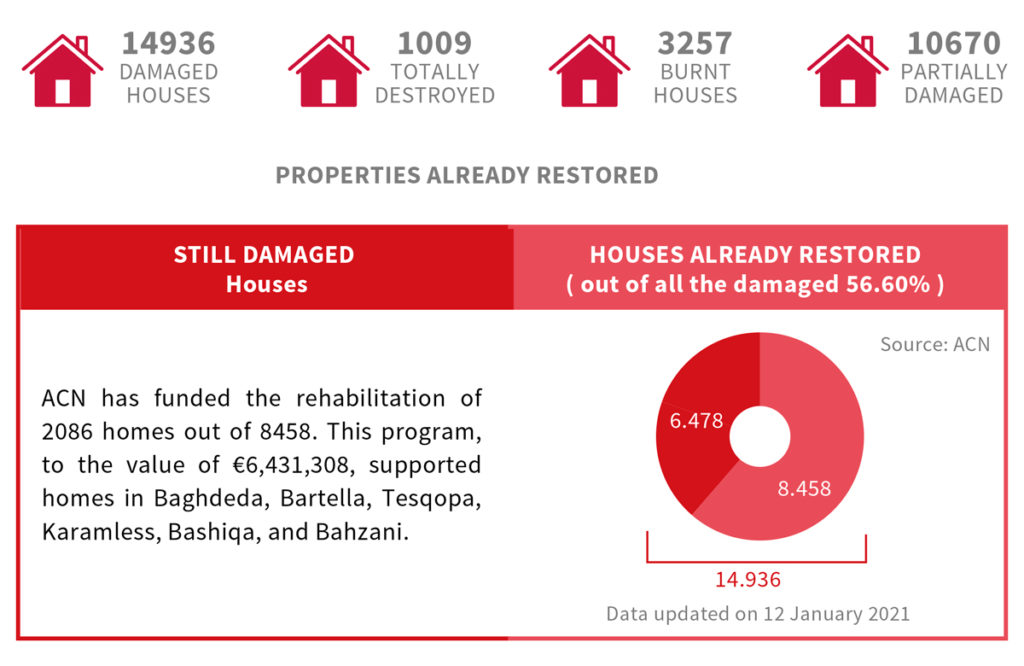 Church reconstruction: One of our flag projects

This project concerns the rehabilitation of the church of Al-Tahira in Baghdeda (Qaraqosh). The church was built between 1932 and 1948, and is named in honour of the Immaculate Conception, defined as dogma by Pope Pius IX in 1854. The building was last renovated in 1964 and 2017, the latter involving structural repair of the pillars of the building, funded by ACN. The area of the church is 1296m2. Al-Tahira Church is the largest Syriac Catholic Church in the Middle East, and notable for its design and cultural significance to the largest Christian city in Iraq. Its roof rests on 22 one-piece marble pillars from Mosul. The church sites are adjacent to a courtyard containing a replica of the grotto of Lourdes and underground, remains of the former church can be located. During the ISIS occupation from August 2014 to October 2016, the Church’s courtyard was used as a firing range. Bullet holes can still be seen in the walls. In 2016, when ISIS fled, all the furniture, manuscripts, and remaining prayer books were burnt inside the Church. The Church’s ceiling was damaged by the smoke and fire. In addition, the Church’s clock tower was dynamited, with the clock itself being lost.

The plan is to renovate the church to make it fully usable as before; specifically, this project involves the second and third phases of the original plan to repair the church. ACN has also contributed to finish the first phase of the reconstruction. Second and third phase are ongoing. The Pope visit has sped up the work. 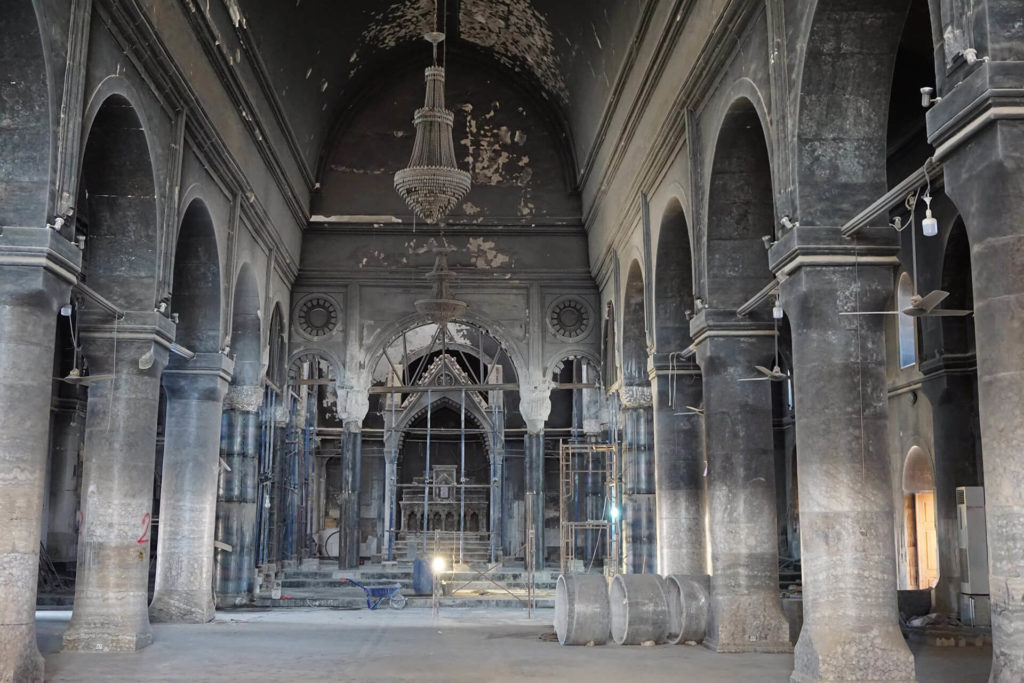 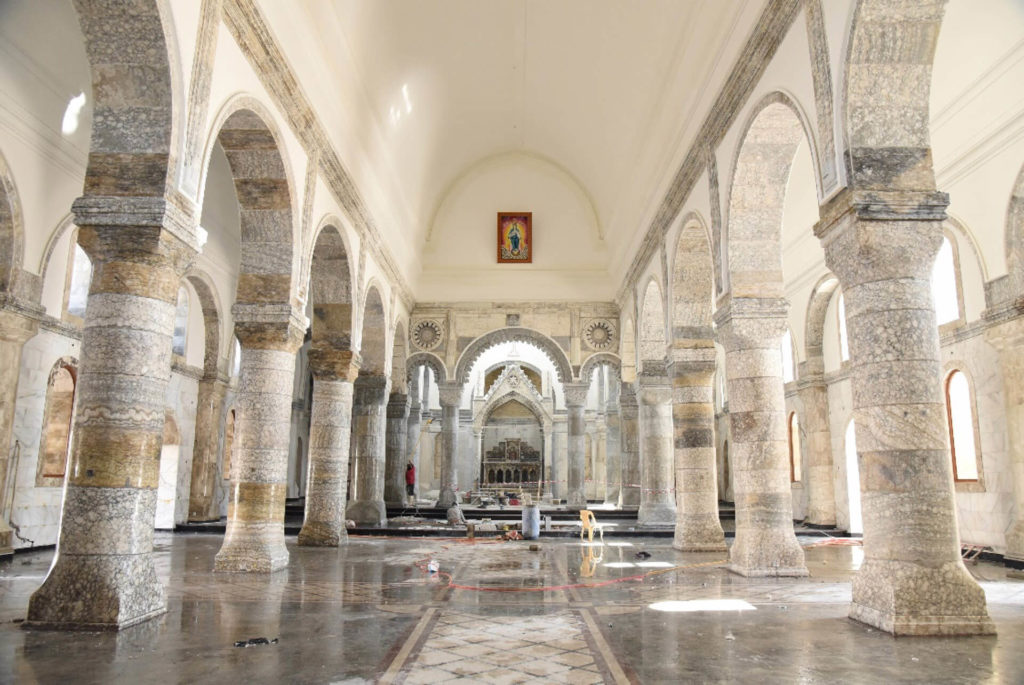 The reconstruction as chance of Christianity’s long-term survival 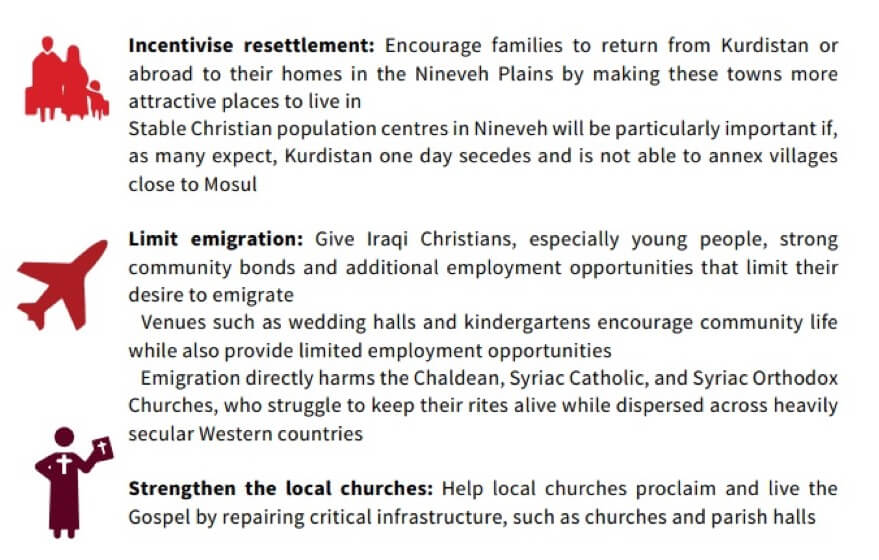