In a press statement received by the ACN Pontifical Foundation yesterday, July 7, the Episcopal Conference of Haiti has expressed its astonishment and condolences at the sad news of the assassination of Jovenel Moïse, president of the Republic, on the night of July 6-7 at his private residence. During the attack, the president’s wife, Martine Moïse, was also shot. In the early hours of Wednesday morning she was taken to Jackson Memorial Hospital in Miami, US, where she  is currently in a critical but stable condition. In its statement, the conference condemns “this unacceptable and shocking murder and offers its deepest condolences to the parents and friends” of the victims. In the note, the conference also hoped for the recovery of the first lady.

“This sad event marks an unfortunate turning point in the history of our people” the bishops of Haiti deplore. A turning point marked “by the deliberate choice of violence made, for some time, by many sectors of the population as a method of survival and dispute resolution.”

Deaths and kidnappings in the capital on a daily basis

Violence in the country has increased dramatically in recent years. According to a report by the National Episcopal Commission for Justice and Peace, received by the ACN Foundation a few days ago, violence and crime in the metropolitan area of Port-au-Prince increased dramatically between January and March 2021. In the metropolitan area alone there were 131  violent deaths, of which 34 victims could not even be identified.

In its report, the Justice and Peace Commission expressed the general feeling of fear among the population due to the lack of security and indicated that kidnappings were a real threat to the inhabitants of Port-au-Prince, with an average of one or two kidnappings per day, but as many as five or six on certain days.

Given the chaotic situation that the country is experiencing, the Catholic bishops recall that “Violence only feeds violence and can only lead to horror.” The country, which is in a “political impasse”, can only solve its problems “through dialogue and consensus”.  The Episcopal Conference of Haiti suggests the creation of a discussion table that includes everyone and asks the population to abandon weapons and choose life. 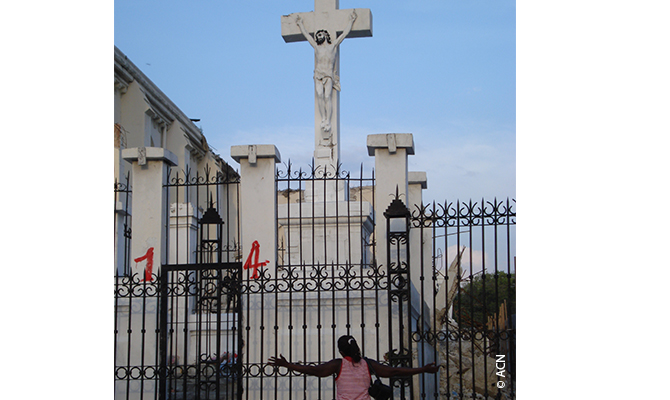 The challenges of the Church, advocate of peace

For his part, Rafael D’Aquí, in charge of Haiti projects for the ACN organization, expressed “deep sadness at the news”. “It is a sign of the total lack of stability that exists in the country. It is a great challenge for the Church, which has a key role as a promoter of peace. Haitian society needs to deepen  the Gospel message of justice, reconciliation and forgiveness,” stated D’Aqui.

Speaking of ACN’s work in Haiti, the project manager highlighted the support provided for many years “to this country deeply affected by poverty and social injustice.” “The creation of a leadership with a heart deeply rooted in faith is a fundamental pillar for the reconstruction of Haiti,” explained D’Aqui.

According to the Brazilian, who has visited the country twice on behalf of the ACN organization, the Haitian Church is facing a great challenge “to ensure a minimum of human dignity to the people, since the State is not fulfilling its role”.

Finally, he asks for prayers on behalf of the organization: “I acknowledge the great effort of the Church to give signs of hope to people in a situation of despair, after so many natural catastrophes and due to extreme poverty. We cannot leave them alone. Let us join the request of the Bishops and ask Our Lady of Perpetual Help, Patroness and Protector of Haiti, to help them and free Haiti from the bonds of hatred and evil.”