The international Catholic pastoral charity and pontifical foundation Aid to the Church in Need (ACN International) has been working for decades with numerous different project partners within Lebanon – above all in the areas of pastoral care and help for refugees. This has proved to be a great advantage in the aftermath of the recent catastrophic explosion in the port of Beirut. ACN has immediately sent 250,000 Euros in emergency aid of starving Christian families, many of whom are facing real hunger. There is a great deal more still to be done. For example, the Christian quarter of Beirut has been extensively damaged. Tobias Lehner has spoken to Regina Lynch, the Director of Projects for ACN International, about the situation in Beirut and what further aid the charity is planning.

What news do you hear from the project partners in Beirut? What is the situation in the city?

Beirut is in a state of crisis. There is hardly any electricity and in some places no means of communication (telephone, Internet etc.). Some 90.000 homes and houses have been destroyed or damaged. The international aid of US$297 million promised on Sunday falls far short of what is needed to rebuild the district affected by the explosion.

What is the local Church doing to help those who have survived the disaster?

Already before the explosion, the Catholic Patriarchates (Maronite, Greek-Catholic, Syriac-Catholic, Armenian) in Lebanon had got together with local parishes and institutions such as Caritas, St. Vincent de Paul and the Pontifical Mission Societies, and created a committee to see how to help the Christians who were already facing soaring inflation, coupled with spiraling unemployment. Many families were on the brink of starvation and Christians were already talking of leaving the country.

Since an aid distribution plan had already been set up, this now means that the Church is in a good position for distributing the aid that is being provided by foreign NGOs, e.g. food, medicine, blankets. It is inspiring to see the role that the Catholic young people are playing in helping with the distribution of the emergency aid. 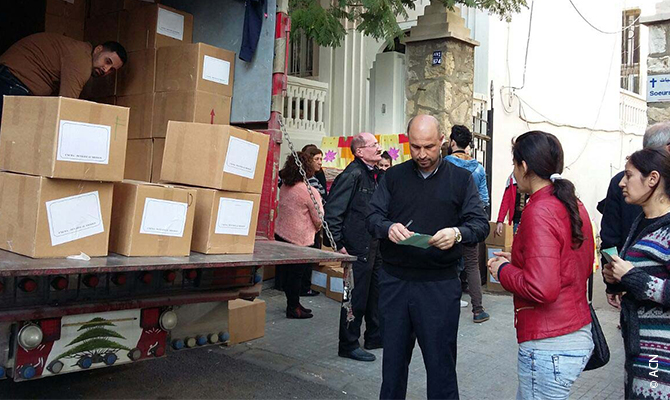 For what purpose will the aid from ACN be used?

The initial aid of EUR 250,000 from ACN will be used for supplying food packages to 5,000 families, most of whom were affected by the explosion, but also for those Lebanese and refugee Christians, who were already struggling to survive before the explosion. Some of Lebanon’s main grain silos were destroyed in the explosion, resulting in even higher food prices. 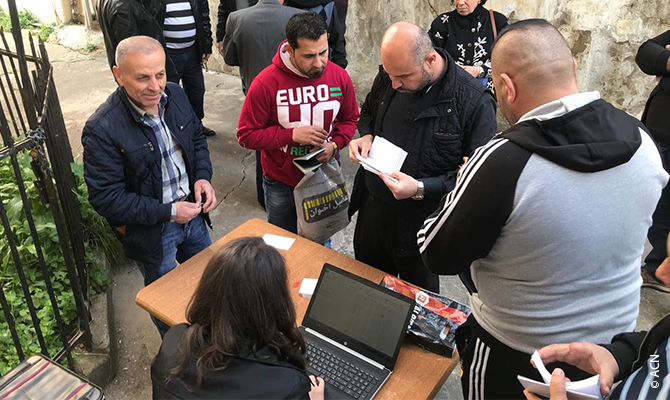 What other relief efforts is ACN planning?

Some 80% of the Christian district of Achrafieh has been among the areas worst affected by the explosion – the lower part of it nearest to the port has disappeared. Hundreds of Christian families have lost their homes and livelihoods. Numerous Catholic hospitals and dispensaries are in urgent need of repair, so that they can continue to function. Countless Church structures have been destroyed or badly damaged, e.g. St. George’s Maronite Cathedral, several parish churches, the Middle East provincial houses of various congregations, convents. Aid to the Church in Need is working with our local Church partners to see which of these needs can be addressed immediately and which subsequently, in the next few months before winter sets in.

Christians in Lebanon may be sure that they can count on the prayers and financial support of ACN’s benefactors.

Russia |
30 October, 2020
Russia: Support for renovation work on the Orthodox children‘s hospice in Saint Petersburg
For seventeen years now ACN has been supporting the Orthodox children‘s hospice in Saint Petersburg, the first of its kind,...
Argentina |
30 October, 2020
Argentina: Support for the Catholic radio station „Radio Maria Auxiliadora“
In the somewhat lengthy-named diocese of „San Roque de Presidencia Roque Sáenz Peña“ in the remote Chaco province of northern...
Pakistan |
28 October, 2020
Pakistani Catholic still lives in hiding after blasphemy acquittal two decades ago
In Pakistan, Shafique Masih has been living in hiding for nearly two decades despite his acquittal in a blasphemy case...