In Bosnia and Herzegovina, affiliation with a religious community is closely linked to ethnic origin. The Bosnians are Muslims, the Serbs are Orthodox and the Croats are Catholic. Catholics here form a minority of just under 14% – with a downward trend. Many of the Catholics were already displaced by the Bosnian war and those who return home are often discriminated against and socially disadvantaged. One focus of our project support is therefore supporting initiatives that promote reconciliation between religious communities. 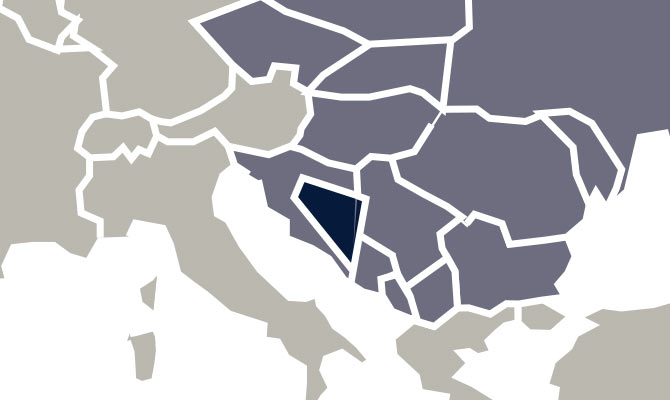 Overall, an increasing Islamisation can be seen in Bosnia and Herzegovina, which is reflected in numerous new mosques in the country. The Catholic Church, on the other hand, has been witnessing a sharp decline. Already during the Bosnian war from 1992 to 1995, every second of what were then approximately 500,000 Catholic Croats was expelled or forced into emigration. The exodus continues to this day. Every year, about 10,000 Catholics leave the country because they suffer disadvantages on the job market, in schools and in social life, and no longer see any prospects for themselves. For years, bishops have complained that Christians and Croatians who had fled the Bosnian war and wanted to return are not receiving the support they deserve.

» Catholics are not on an equal footing in our country. «

Due to the widespread social discrimination against Catholics, the Catholic Church is increasingly involved in initiatives that involve interreligious reconciliation work. This ultimately benefits all ethnic groups in the country. At the same time, the initiatives bring permanent jobs to schools and charitable institutions, giving numerous families hope for the future. A good example of this is the John Paul II Youth Centre in Sarajevo, which provides a range of interdenominational dialogue initiatives. It is supported every year by ACN and even opened a branch in northern Bosnia in autumn 2018 – due in part to ACN’s help. In addition, we support the reconstruction of churches destroyed in the Bosnian war, help fund the formation of priests and help sisters with subsistence grants.