Iraq has been left with nothing. The country is struggling to rise from the rubble left behind by the Islamic State during the years of siege. But corruption in government and administration is making reconstruction efforts difficult. Two out of three Iraqis are unemployed. Six million people are dependent on outside support. ACN provides aid directly on site. We approved a total aid budget of 5.6 million euros for Iraq in 2019. Thanks to this aid, many Christians can return to their former homeland. ACN’s main focus in Iraq is the reconstruction of churches, monasteries, schools, kindergartens and parish centres. In 2019, our total budget for construction assistance in Iraq was 5.6 million euros. This is long-term aid that hardly anyone else is providing. It creates stability, prospects and, last but not least, jobs through the construction and renovation measures. 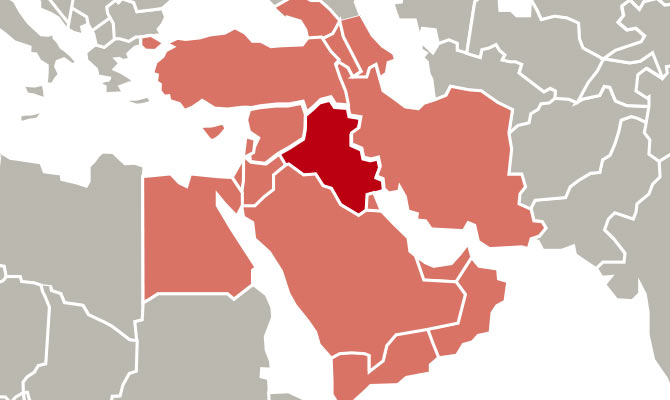 But nothing gives the Christians in Iraq more confidence than the reconstruction of their churches, which were destroyed by the IS. This also includes our construction aid for the renovation of the Al-Tahira Church in Bakhdida, the largest church in Iraq. Not only churches, but schools too have resumed daily classes.

We are pleased about every Christian who returns to Iraq.

Pastor Georges Jahola describes the current situation as follows: “Of course, not everything is positive yet. The problems in our country are enormous. One thing is certain: if Christians from all over the world hadn’t been so generous in helping our people, there would be no one left here.” Not only the reconstruction of churches, but also the rebuilding of destroyed housing is a central concern of ACN in Iraq. As a co-initiator of the “Nineveh Reconstruction Committee”, we have funded the restoration of 2,086 homes on the Nineveh Plains with 6.43 million
euros in recent years, which is more than one-third of all the homes rebuilt in the region.

This makes the Nineveh project the largest reconstruction programme ever undertaken in Iraq. Especially in Bakhdida, the largest Christian city in the country, ACN has enabled the return of thousands of families who have enthusiastically resumed church life through catechism classes, women’s groups, youth work and radio broadcasts.

Thousands of Christians have already been able to return to their homes.

A portion of our construction assistance was used to renovate church halls where weddings and other celebrations are held. Many families could not otherwise afford such celebrations. Projects like these also serve to rebuild social cohesion in parishes and encourage people to return to their homes, for many refugees have found shelter with relatives and friends. Among these are Christians.

They come from Bartella, Tesqopa, Karemlash, Bashiqa or Bahzani and eagerly await the right opportunity to return to their homeland. When one realises that at the end of the civil war and the reign of IS terror only 10% of the once 1.5 million Iraqi Christians live in the country, one can clearly see how today’s Christian Church in Iraq has been bled dry. Nevertheless, there is a new glimmer of hope among the faithful. Bishop Warda puts it in a nutshell: “We are a Church of martyrs, but every martyrdom is followed by a resurrection.” 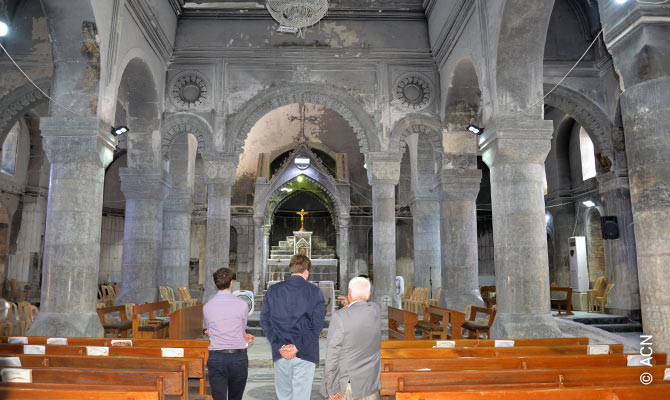 The destruction of the Al-Tahira Church in Bakhdida by IS rebels was the moral nadir of the occupation period for many Christians. Before fleeing, the terrorists had piled up and set fire to benches, confessionals and all the furniture. All that remained were the bare, charred walls. Many believers gathered daily for worship in the remains of the church, which as the largest Christian church was the pride of the city. ACN allocated a budget of 510,000 euros to renovate the church interior in 2019. The Syriac Catholic Archbishop of Mosul, Petros Mouche, told ACN: “The Al-Tahira Church was built in 1932 by the people of Bakhdida. We want the church to remain a Christian symbol, and with its new splendour, to encourage residents of the city to stay.”